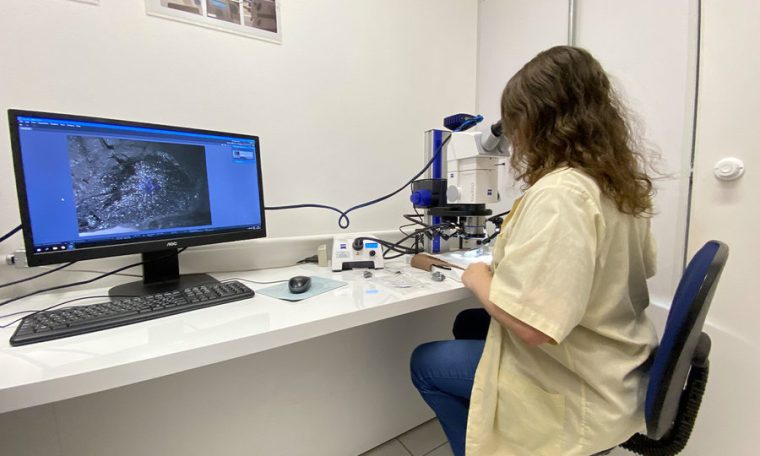 What can fire tell about Earth’s past? That’s a question that has been answered by a group of researchers from Valle du Taquari University’s Postgraduate Program in Environment and Evolution (PPGAD), which is developing studies in the areas of paleobotany and palaeophyre. Evidence of fire, including macro-charcoal, has been important tools for expanding our understanding of natural systems and the environment from millions of years ago. UNIVATE’s research activities in the field take place in the Laboratory of Paleobotany and the Biome Evolution of the Science Museum.

In October last year, a group of research institutions, including Univates, uncovered an unprecedented study on the occurrence of paleofires in Antarctica 75 million years ago in the Cretaceous period. This scenario has expanded with further studies and, now, a new research developed in partnership between UNIVATES and three other institutions confirms that India, too, was found in the Lower Cretaceous between 145 million and 100.5 million years ago. There was a fire during the period.

The new study, published in the journal Current Science, takes a look at the part of India where the macro-charcoal (charcoal fossil) record did not exist and corresponds to the Saurashtra sedimentary basin in the present-day Saurashtra region of northwest India. and near the Arabian Sea.

This study is signed by Gisele Sana Rebellato and is part of her doctoral thesis developed at PPGAD. The thesis advisor, Professor André Jasper, also collaborated on the research, in addition to Andrea Pozzebon Silva and Julia Siqueira Carnier, biological science course students and scientific initiation scholarship holders, both from UNIVATE; Alpana Singh, Shivanna Mahesh, Bhagwan D. Singh, Birbal Sahni Institute of Paleosciences, India; Marlon de Castro Vasconcelos from the State University of Rio Grande do Sul; and Dieter Uhl of the Senckenberg Research Institute and Visiting Professor at PPGAD.

Plant fires are common events in modern and past ecosystems, an important evolutionary driver of biodiversity and ecosystem dynamics since the emergence of the first vascular plants in the Silurian period, which lasted from 443.8 million to 419.2 million years. is the interval. In general, after a fire, plants that did not undergo complete combustion may be incorporated into the sediment and fossilized as macro-charcoal, thus the Paleofires occurring in the Palaeolithic environment in the deep time. Evidence of.

The study of these records is important and allows to draw conclusions about the composition of vegetation affected by fire and some of the conditions of the surrounding areas, as well as to expand knowledge about the geological past of a given location. Considering the occurrence of macro-charcoal, only a few records have been published for strata in India and they mainly originated from Permian deposits (298.9 to 251.9 million years ago).

“Paleofires coincided with the emergence of the first terrestrial plants and were distributed throughout planet Earth, occurring at varying intensities. Since fire is one of the factors that have shaped biodiversity over millions of years, macro-charcoal Fossils, including plants, provide information about burnt vegetation and environmental and climatic conditions in deep time”, describes researcher Gisele Sana Rebellato .

Although the Cretaceous is considered a category with large concentrations of Paleofires globally, only one macro-charcoal record and two micro-charcoal events have been published so far for this range from India. “Although previous work has indicated the occurrence of paleofires in the Cretaceous of India, this study confirms that the distribution of paleofires was wider than commonly imagined in the Cretaceous, now known as northwest India. is”, Jasper, thesis advisor whose result was published in the article.

The author of the work suggests that research on this topic was motivated by the lack of studies on paleofires that occurred in India during the Cretaceous and the total absence of a macro-charcoal record for the entire sedimentary basin, in this case the Saurashtra Basin. “This information gap raised the question of whether or not there was a fire in the area, and if so, which vegetation gave rise to the macro-charcoal. These questions, this unease that is inherent in scientific research, help to try to understand can determine what the environment was like under the influence of the Paleofires”, he explained.

Scientific research indicates that the Cretaceous was one of the most frequent events of the Paleofires in Earth’s history, characterized by high concentrations of (paleo) oxygen, high temperatures, and the delineation of present-day continental boundaries. However, the distribution of these fossil coal records is uneven between the hemispheres – with much greater amounts in the Northern Hemisphere than in the Southern Hemisphere. Given this context, research such as Gisele contributes to setting new frontiers for scientific knowledge in the field.

“Other important data for the Cretaceous is the emergence and expansion of angiosperms, flowering plants, and that fire may have previously facilitated the dispersal and diversification of angiosperms, which are today the plants that dominate terrestrial environments and, as such, the base There are human and non-human food”, the researcher says.

In addition, by looking at the past, the study helps to understand the workings of both deep-time and present-day natural systems, and may help to understand the natural and human processes related to climate change currently underway on Earth.

The new studies are being conducted by the Laboratory of Paleobotany and the UNIVATES team involved in the evolution of the biome. Gisele, in particular, is currently analyzing material from the Brazilian sedimentary basin, also from the Lower Cretaceous.