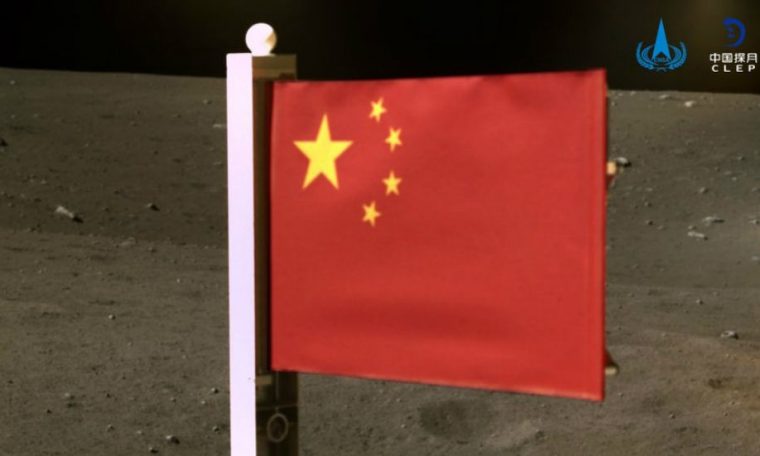 China puts a flag on the moon Reported by the BBC, Citing state-run media, following a trip to the lunar surface this week.

An image The Chinese national flag is displayed on the surface of the visible moon, issued by China’s National Space Administration.

State-run Global Times The newspaper said the photo was Chang-5 boarded a lander before ascending the moon.

The Chinese spacecraft said the spacecraft “hoisted the five-star red national flag, it was made of real cloth fabric.”

Chinese Foreign Ministry spokesman Hua Chunning too Shared Pictures of the moon and the national flag.

We are proud to fly our national flag on the moon. The # Change 5 The probe collected samples and landed on the moon. It will contribute to global scientific studies in areas such as the formation and development of the moon. pic.twitter.com/1UJskx3d9s

The Global Times notes that the last two Chinese lunar missions had flags on craft coatings.

The newspaper noted that the Chinese flag was first seen on the moon during the country’s inaugural lunar mission, Chang-3, in 2013. In 2019, the Chang-4 lander and rover brought the flag to a non-lunar part of the moon.

Project leader Li Yunfang told the Global Times that there was a system for raising the flag. Given features such as protection against harsh temperature differences.

“A simple national flag on Earth will not escape the severe lunar environment,” Cheng Chang, a project developer, told the state-run newspaper.

“This is not an easy task. When the samples collected on the moon are returned to Earth, we hope that the study of this precious cargo will benefit everyone who can advance the international science community. He tweeted.

Congratulations to China on the successful landing of Chang 5. This is not an easy task. When specimens collected on the moon are returned to Earth, we hope that everyone will benefit from being able to study this precious cargo that can advance the international scientific community. pic.twitter.com/2xoKouf3dq

The United States was the first country to fly the flag to the moon in 1969 during the Apollo 11 mission. Five More flags Subsequent missions were deployed until 1972.

Citing satellite images, NASA said the five flags were still standing in 2012, but experts said they had been bleached white with sunlight.

Astronaut Buzz Aldrin said the first flag was placed very close to the Apollo Lunar Module and was probably flown when it exploded.