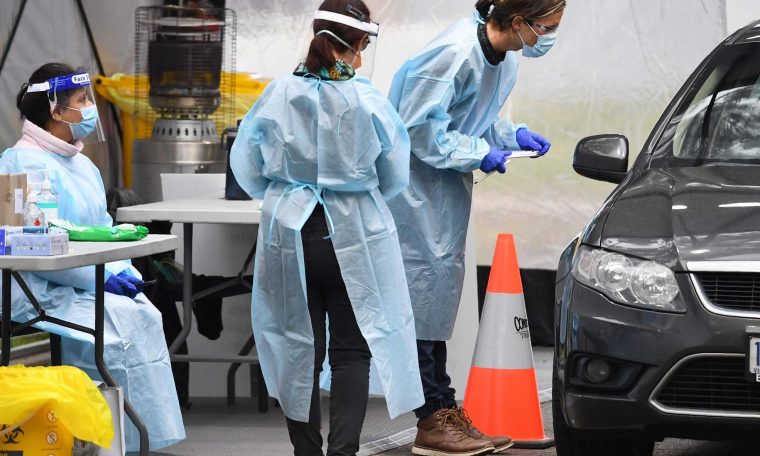 The world is certain to have a coronavirus vaccine in 2021, if not within the next few months, the German health minister has said. “Thanks to us all working together – researchers, scientists, the public – we will probably have a vaccine faster than ever before in the history of humanity,” Jens Spahn added.

In Oldham, Greater Manchester, residents fear that if a second lockdown is imposed they will not have a town to come back to. One told The Independent: “There’s a lot of shops here that just about survived the first lockdown. They’ve scraped through. But a second one…”

Meanwhile, about 3.4 million people in England have been infected with Covid-19, more than 10 times the official count, according to an Imperial College London study. But many people showed no symptoms.

Since the launch of NHS Test and Trace, 214,890 close contacts of people who have tested positive for Covid-19 have been reached through the tracing system and asked to self-isolate, according to figures released today.

That number represents 81.5 of the 263,515 people identified as close contacts.

The remaining 48,625 people (18.5 per cent) were identified as close contacts, but were not reached.

The weekly figures show that 74.2 per cent of close contacts were reached in the week ending 5 August, up from 72.4 per cent in the previous week, but down on the 90.7 per cent reached in the first week of Test and Trace in late May/early June.

By contrast, local health protection teams tracked 97.9 per cent of close contacts of people who tested positive for Covid-19, and asked them to self-isolate.

Test and trace is undergoing something of a shake-up after local public health teams proved more effective than the national system, run by private companies.

180 teachers and pupils infected since July in Indonesia

Indonesia’s move to reopen schools in some areas risks creating new clusters of coronavirus cases, with at least 180 students and teachers infected since a new academic year started in July, a teachers’ federation said on Thursday.

The world’s fourth-most populous country has allowed schools to reopen with limited capacity in “yellow” and “green” zones, with fewer reported cases and covering 43 per cent of the student population, according to government data.

Parents can opt not to send their children to schools in these areas and extracurricular activities are not allowed.

“We’ve always sounded out our worries that schools could become new clusters,” Purnomo said. “Distance learning, be it offline or online, is safer than face-to-face lessons.”

Wiku Adisasmito, a spokesperson for Indonesia’s Covid-19 task force, told reporters on Thursday that new clusters would not break out at schools if all health protocols were adhered to.

Has coronavirus shown Uefa how to revolutionise the Champions League format?

n the year of asterisks, the Champions League quarter-finals are notably different. Coronavirus has changed the landscape for better or for worse. In terms of European football’s most prestigious competition, it feels considerably better, writes Tony Evans.

The tight, single-game knockout tournament taking place in Lisbon is satisfyingly compact. All the ties are enticing and the neutral venues give the matches a different dimension. The pandemic denied football fans the pleasures of Euro 2020 but the 11-day finale of the Champions League provides a modicum of compensation.

London’s City Airport is pausing plans to expand after taking a hit from coronavirus.

The £480m scheme will be halted at the end of the year because, it said, the return of passenger demand to pre-Covid-19 levels “will take longer than initially expected”.

The hub was closed for nearly three months from 25 March due to the pandemic.

New aircraft stands, a parallel taxiway and new passenger facilities are due to be completed by this stage, but a major extension of the terminal building will be delayed.

An Indian man has been sent to prison for five months in Malaysia for violating a home quarantine order and precipitating dozens of new coronavirus infections, the Bernama state news agency reported.

The 57-year-old, who owns a restaurant in the northern Malaysian state of Kedah, pleaded guilty to four charges of violating a mandated 14-day home quarantine order upon his return from India in July.

He was also fined the equivalent of £2,200 by the Alor Setar Magistrates’ Court, which held a special hearing at a Kedah hospital where the accused was being treated, Bernama reported.

Authorities previously said that the man had tested negative for Covid-19 and left his home to visit his restaurant.

But a second test came back positive. A total of 45 new infections linked to him have since been reported in three Malaysian states, including the man’s family members, restaurant workers and customers.

German officials were forced to work through the night to clear a backlog of 900 positive Covid-19 tests – in order to inform the subjects that they had caught the disease.

Bavarian health minister Melanie Huml said all people with positive results would be informed today and that systems were being improved to prevent any further delays.

Bavaria has been offering free voluntary tests at airports, as well as specific train stations and highway rest areas, and has carried out some 85,000 evaluations since the end of July, Ms Huml said.

The interest was higher than expected, and the delays were almost exclusively at the rest areas and train stations.

Private companies are now taking over the system and digitising it, the DPA news agency reported.

‘I don’t know if there would be a town to come back to’: Local lockdown would cripple Oldham for years, residents fear

At the Tommyfield Market in Oldham – the Greater Manchester town now on the front line of the UK’s battle with coronavirus – on Wednesday morning, there was frustration and fear in equal measure, writes Colin Drury.

Frustration because of an overnight council warning that, after weeks of increasing infection rates, the borough may be just “days away” from becoming the first place in England returned to lockdown. “How did they let it get to this?” asked one person.

But fear too. Fear most of all perhaps. Fear that if pubs, restaurants, leisure centres and non-essential businesses in this historic mill town really do have to shut again for a prolonged period, it could cripple the entire area – for years to come.

See also  MT Sarkar visits USA to learn about an irrigation project that is a world reference :: Agribusiness News

Hong Kong reported 69 new coronavirus cases on Thursday, of which 65 were locally transmitted.

Authorities warned that the global financial hub was still in the middle of a critical period for controlling the virus, which has experienced a resurgence since early July.

Since late January, more than 4,200 people have been infected in Hong Kong, 65 of whom have died. Thursday’s figure was up slightly from Wednesday’s 62 cases.

In a bulletin, the health ministry said total confirmed cases had risen to 147,526, the highest in southeast Asia, while confirmed deaths had reached 2,426.

The Philippines plans to launch clinical trials for a Russian coronavirus vaccine in October after Russia became the first country to grant regulatory approval for a Covid-19 jab.

If you want to learn about experts’ reaction to Moscow’s announcement, you can read our story from yesterday:

Europe’s biggest holiday company lost €1.1bn (£1bn) during April, May and June as the coronavirus pandemic took hold worldwide and put an end to almost all tourism, writes Simon Calder.

But Tui says it has “successfully resumed its travel activities” in all markets – including the UK.

Reporting its third-quarter results, the Anglo-German travel group said its financial performance had met its own expectations.

Russia reported 5,057 new cases of Covid-19  on Thursday, taking the national total to 907,758 – the fourth largest caseload in the world.

A sheriff in Florida has banned deputies and visitors from wearing face masks amidst the coronavirus pandemic, writes Louise Hall.

Marion County Sheriff Billy Woods outlined the new regulations in an email to staff that he had considered both sides of the argument but there was no room for negotiation on the decision.

“Now, I can already hear the whining and just so you know I did not make this decision easily and I have weighed it out for the past 2 weeks,” he said.

Insurers paid out nearly £1m a day during pandemic

Insurers paid a total of £90m during the height of the Covid-19 crisis to support the families of people who died due to the virus.

Around 7,000 life insurance claims were received between 1 March and 31 May, the Association of British Insurers (ABI) said, equating to around £980,000 of claims being paid out every day.

A Covid-19 vaccine will be available in the coming months and definitely next year, Germany’s health minister has said.

“I’m optimistic that in the next months, and certainly in the next year, there can be a vaccine,” Jens Spahn said.

He declined to give a specific month and said it was not yet possible to say how often people would need to be vaccinated or how long-lasting the immunity it conferred would be.

He added in an interview with ZDF television: “But one thing we can say is that thanks to us all working together – researchers, scientists, the public – we will probably have a vaccine faster than ever before in the history of humanity.”

Ukraine recorded a record daily jump of 1,592 coronavirus cases on Wednesday, the national council of security and defence said on Thursday.

The number of infections has increased sharply in the past two months as authorities have eased some restrictions, allowing cafes, churches and public transport to reopen.

Pupils have said they are prepared to take to the streets in protest at this year’s A-level results as ministers come under fire for a system critics warn “beggars belief”, write Zoe Tidman and Kate Devlin.

The National Union of Students (NUS) backed the use of demonstrations, saying schoolchildren had been left with no choice.

Ministers are facing increasing pressure after Ofqual, the exams watchdog, said it could not clarify an eleventh hour change to allow mock grades to be considered in some cases until days after the results are released.

The coronavirus outbreak in Melbourne, Australia’s second-largest city, appeared to show a decline in new infections on Thursday.

Victoria state premier Daniel Andrews said there were 278 new infections and eight new deaths, down from about 700 per day at the outbreak’s peak.

Mr Andrews said: “We would just caution against any Victorian thinking that we aren’t in the midst of a real marathon.

“This is an endurance race, and we need to stay the course on this. We need to be as vigilant each and every day.”

The neighbouring state of New South Wales recorded 12 new cases and one death.

Health officials are still working to trace the origin of the outbreak.

A lockdown imposed in Auckland could be extended well beyond an initial three days, officials say.

Before the cluster was discovered this week, New Zealand had had no community cases of Covid-19 for 102 days, registering only imported cases.

3.4 million in England infected with virus

More than 10 times as many people as officially believed have been infected with coronavirus in England, a study suggests.

Some 3.4 million people have caught the disease, the Imperial College London research found.

The results suggest 6 per cent of England’s population had already been infected by mid-July.

Johns Hopkins University in the US listed England’s case numbers at 315,546 as of Thursday morning.

The study tracked the spread of infection across England after the pandemic’s first peak, with volunteers testing themselves at home between 20 June and 13 July.

Londoners were most likely to have been infected, along with health and care workers, people from black, Asian and other minority ethnic groups, and people living in larger households.

Nearly one-third, or 32 per cent, of people with antibodies had shown no symptoms, a figure which rose to 49% of those aged older than 65.