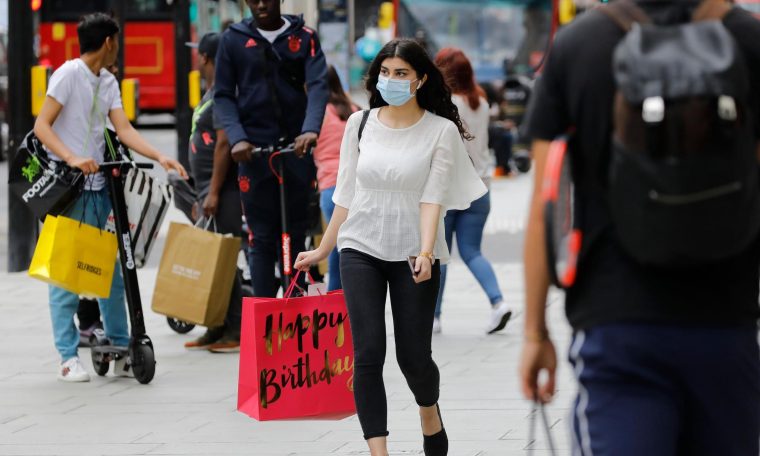 New government figures show that the coronavirus R rate could be above 1 for three regions across England as thousands of people are expected to flock to the coast to enjoy hot weather this weekend.

According to data released on Friday, the R value is estimated to range between 0.8 and 1.1 for London, the northwest and the southwest.

The national reproduction rate currently ranges between 0.8 and 1.

England’s growth rate is between -5 per cent and 0, slightly up from -4 per cent to -1 per cent last week.

It came as members of the public were told to stay away from beaches around Bournemouth amid fears safe social distancing would not be possible with large crowds of sunseekers.

The Met Office said temperatures reached 36.4C at Heathrow and Kew Gardens in London during the heatwave on Friday, making it the hottest August day in 17 years.

Andy Page, the Met Office’s chief meteorologist, warned much of southern England and eastern areas of Wales was expected to see hot weather continue until the middle of next week, with some “exceptionally warm and humid nights ahead”.

In a joint statement on the R value, the Government Office for Science and the Scientific Advisory Group for Emergencies (Sage) warned that “these estimates represent the transmission of Covid-19 from several weeks ago due to a time delay between someone being infected and needing healthcare.

“Estimates that use more timely data reflecting infections suggest a higher R for England than shown here. As a result, Sage does not have confidence that R is currently below 1 in England.”

The estimates for R and growth rate are provided by the Scientific Pandemic Influenza Group on Modelling (SPI-M), a subgroup of Sage.

It said: “We are starting to see early indications that these values may be increasing.

“This is not yet reflected in these estimates because the data used to calculate R and growth rate reflect the situation from a few weeks ago.”

A time delay between initial infection and the need for hospital care usually means it may take between two and three weeks for the changes in the spread of Covid-19 to be reflected in the estimates.

Government officials also said that a single average value does not accurately reflect the way infections are changing due to the significant amount of variability being reported across the country.

“It is more appropriate to identify local hotspots through, for example, monitoring numbers of cases, hospitalisations and deaths,” Friday’s statement read.

The R number represents the number of people each Covid-19 positive person goes on to infect.

Despite the latest estimates, separate data from the Office for National Statistics has suggested that the number of new coronavirus cases may be starting to level off.

After analysing data from nearly 120,000 swab tests, an estimated 28,300 people in England were projected to have had Covid-19 during the week from 27 July to 2 August. This equates to about one person in every 1,900.

Although this is higher than the lowest estimate at the end of June, the trend appears to be heading back down again after creeping steadily up throughout July.

Meanwhile, statisticians at the Medical Research Council Biostatistics Unit at the University of Cambridge, which feeds information directly to the SPI-M, said on Thursday the R value was now likely to be close to 1 in most regions, with the southwest potentially above 1, although the low number of overall infections makes it difficult to be accurate about the spread of the disease.