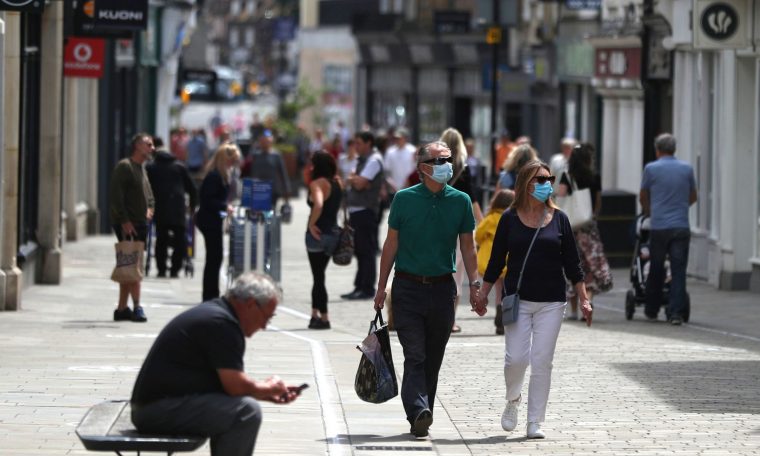 The UK has reported its highest daily number of new coronavirus cases since 12 June.

A total of 1,522 people received a laboratory-confirmed COVID-19 test on Thursday, despite infection rates remaining well below those in Spain, France and other parts of Europe suffering a resurgence of the disease.

The latest daily new case total figure is up from 1,048 on Wednesday.

It is the highest daily new case total since before non-essential shops reopened to the public in England on 15 June, and restaurants and pubs resumed operations on 4 July.

The government has since announced a tightening of restrictions on some overseas travel, with travellers arriving in the UK from Switzerland, the Czech Republic and Jamaica having to quarantine from 4am on Saturday.

A further 12 people were also reported to have died within 28 days of testing positive for coronavirus, meaning the number of people who have now died with the disease in the UK is at least 41,477.

It comes amid fears of an increase in cases across Europe, with France reported 5,429 new cases on Wednesday, which prompted its government to order the mandatory wearing of face masks across Paris from 8am on Friday.

Earlier on Thursday, the government’s NHS Test and Trace operation revealed a recent decrease in cases during the week to 19 August, with some 6,115 new positive cases of COVID-19. This was down 8% on the week before and the first decrease since the start of July.

See also  Metro Manila retains strength in other areas under signal number 1, such as 'Pepito'

Deaths from all causes in England in the week to 23 August showed no statistically significant excess compared with
previous years, according to public health data.

Despite falling short of the target, the number of people contacted through the test and trace system still increased during the week to 19 August to 7,941, in part due to an operational delay the week before.

Of these, 72.6% were reached and asked to provide information about their contacts, compared to 79% the week before, the government said.

A total of 75.5% of people who were in close contact with those who were initially contacted were reached.

Since the NHS contact tracing system was launched in late May, 65,398 people who tested positive for COVID-19 in England have had their cases transferred to it.

A further 1,671 people (2.6%) could not be reached because their communication details had not been provided.

From the 50,876 people who were reached, 246,262 of their close contacts were then successfully contacted and told to self-isolate.

Bradford in West Yorkshire has had the lowest proportion of people being successfully contacted through test and trace, with just a 43% success rate for contacts handled online or by call centres since the operation started.

See also  Millions of crabs cross the road during their migration to Australia; watch | World

The next lowest were Middlesbrough and Peterborough with 47%, Blackburn with Darwen and the City of London & Hackney was at 48%, while Nottingham and Oldham were both at 49%.

Analysis: Rise in cases is no cause for concern with no sign of second wave
By Thomas Moore, science correspondent

We shouldn’t be alarmed by the sharp rise in cases.

It’s important to look at the underlying proportion of positive results – and that hasn’t changed.

So what’s going on?

It’s likely that many more tests are being done in hotspots like the North West of England and which is picking up people who have mild symptoms or none at all. They would have gone undetected before.

It’s reassuring the Office of National Statistics, which does random sampling of households, is also saying that infection rates are stable.

Scientists expect there to be a second wave in the autumn, but there are no signs of it yet.