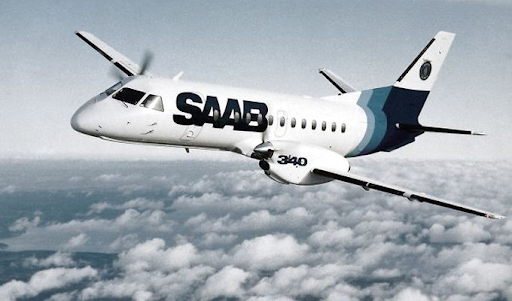 In this article, you will learn all the features of the Saab 340 aircraft, as well as understand which plane seats are best suited for your flight.

In a cooperative effort between Saab AG and Fairchild, the Saab 340 twin-engine turboprop utility aircraft on January 25, 1983, the Saab 340 (then known as the SF340) had its first flight. SAAB-Fairchild 340 aircraft have begun flying for airlines and have performed well.

A bigger horizontal stabiliser and more powerful GE CT7-9B engines distinguished the Saab 340B from its predecessor. Additionally, a vibration and noise reduction system has been included in the most recent Saab 340B aircraft (it lowered the noise and vibration level by 10 dB). The Saab 340B can travel 1730 kilometers at a maximum cruising speed of 522.22 kilometres per hour while carrying 30-36 people and baggage (the normal configuration of the Saab 340B cabin is 33 passenger seats and a 6.8 m3 freight compartment).

An interesting fact about the plane

There were a total of 200 Saab 340B planes built (serial numbers 160-359). As of serial number 360, the Saab 340B Plus, an enhanced version of the Saab 340B aircraft, commenced production. Vibration and noise reduction systems were fitted, the cabin interior was renovated, and the toilet was moved from the rear to the cockpit area, allowing for more cargo room.

Passenger capacity ranges from 27 to 36, depending on the configuration of the cabin, and the maximum cruise speed of the aircraft is 522.22 km. h. The basic cabin configuration has 34 passenger seats and an 8.4-m3 luggage compartment. The Saab 340B Plus has upgraded wings (longer wingtips) that allowed it to fly 1851 kilometers further than the standard Saab 340B. A total of 455 Saab 340 commercial passenger planes were built by Saab AG.

The Saab S340 was also used to develop variants for cargo transportation, VIP transportation, and aircraft for maritime search-and-rescue aviation and the coast guard (Saab 340B plus SAR and Saab 340 MSA). Despite the fact that the Saab 340 was retired in 1999, Saab Aircraft Leasing Inc., which at the beginning of 2014 still possessed a fleet of roughly 120 Saab aircraft, is now offering the opportunity to lease or acquire a Saab 340. Saab 340 and Saab 2000, respectively.

The Saab 340’s frequent use on charter flights and scheduled regional flights confirm its low cost and great economic efficiency for moving freight and people by air.