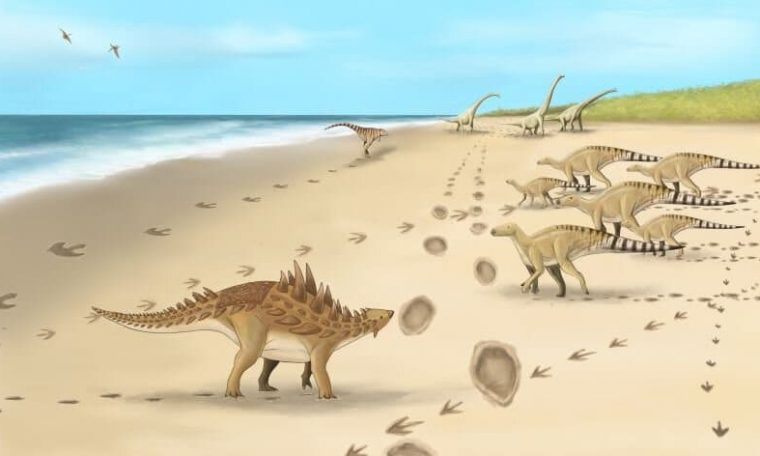 Footprints of at least six species of dinosaurs – the last of these animals to have walked UK soil about 110 million years ago – have been found in Kent, south-east England, near London.

Footprints were found on coastal cliffs in Folkestone, County Kent. There, storm conditions affect the reef and coastal waters, leading to the continued disclosure of new fossils.

According to paleobiology professor David Martil, “This is the first time dinosaur footprints have been found in what is known as the ‘Folkestone Formation’, and it is an extraordinary discovery as these dinosaurs would have been the first to roam the country. “.

“They were running close to the White Cliffs of Dover,” says Martil. “Imagine the next time you’re on the raft and you see those magnificent rocks”, said the professor.

According to Phys.org, the identified footprints belonged to a variety of dinosaurs, indicating that there was a relatively high diversity of these animals in southern England at the end of the Early Cretaceous period, 110 million years ago.

It is believed to be as follows: Ankylosaurus, sturdy looking armored dinosaur that resembled a living tank; theropods, three-toed carnivorous dinosaurs such as Tyrannosaurus rex; and ornithopods, herbivorous dinosaurs with “bird hips”, so named because their pelvic structure is somewhat bird-like.

Philip Hadland, curator of collections at the Hastings Museum and Art Gallery, is the study’s lead author. “In 2011, I got unusual impressions of the Folkestone Rock Formation. It looked like they were repeating themselves and all I could think about was that they might be caught,” Hadland says.

This, he said, was contrary to what most geologists say about rocks in England. “But I looked for more footprints and as the tides appeared more through the erosion, I found even better ones”.

Hadland says more work was needed to convince the scientific community of its validity. For this reason, he sought out experts from the University of Portsmouth to improve his studies on what he found.

Footprints similar in size to that of an elephant have been identified as possibly belonging to an ornithopod, whose footprints, but smaller in size, have also been found in China during the same period.

The largest footprint – 80 cm wide and 65 cm long – was identified as belonging to an Iguanodon-like dinosaur. Iguanodonts were also herbivores, growing up to 10 meters in length and walking on two or four legs.

Hadland says: “In addition to finding that dinosaurs went ashore, as well as their modern relatives, birds, we also found new evidence that changes the interpretation of the geology of the Folkestone Formation’s layers.”