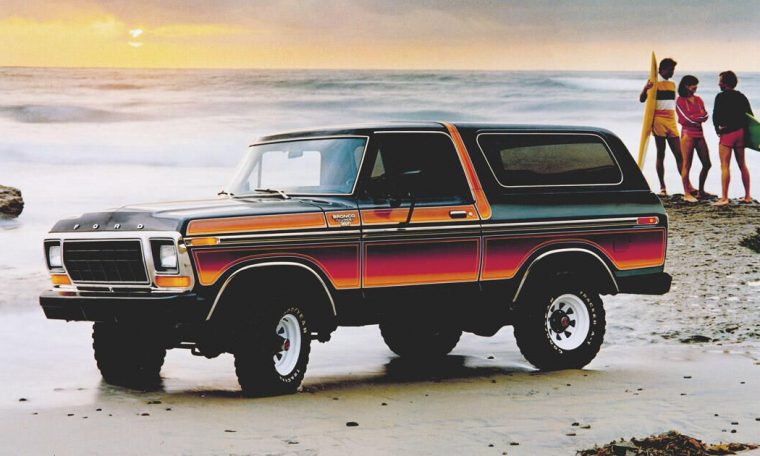 Yes, it’s really been three years since Ford first announced the return of the Bronco at the 2017 Detroit Auto Show. It’s been a long wait, but now, we’re finally on the cusp of seeing the new 2021 Ford Bronco in all its blocky glory.

From the start of the nameplate’s production in 1965, the Bronco has lived several distinct lives. So before we move forward into the model’s future, it’s time to take a look back.

Despite growing to occupy larger segments in future iterations, the original Bronco was destined to be a compact SUV, going up against the likes of the International Harvester Scout and the Jeep CJ-5. Recreational utility vehicles were still very new at this point, giving Ford the opportunity to take a crack at a burgeoning segment.

None other than legendary auto exec Lee Iacocca approved the first-generation Bronco for production in early 1964. Its chassis was unique in that no other Ford-family vehicle utilized its short, 92-inch wheelbase. Four-wheel drive was standard at first, rocking Dana drivetrain components from the axles to the transfer case.

The first-gen Bronco’s look was no-nonsense, opting for things like flat glass panels to keep costs in control and simple-to-press sheetmetal forms. It was available in three different body styles, including the usual two-door configuration, in addition to more interesting variants like an open-top roadster. As the years went on, though, these bodies were eventually shelved in favor of the most popular two-door “wagon” layout. Sales averaged between 14,000 and 25,000 units per year throughout its run.

Since the Bronco’s inception, the SUV segment started taking off. But compact SUVs weren’t the object of everyone’s attention by the late 1970s — larger models grew in popularity, despite the aftereffects of the 1973 oil crisis. But with vehicles like the Chevrolet K5 Blazer and the Jeep Cherokee, Ford needed to react to the market’s whims.

And so, the second-gen Bronco grew — a lot. Borrowing its chassis from the F-100 pickup (a trend that would continue in later generations), the 1978 Bronco added an entire foot to its wheelbase, in addition to growing 11 inches wider and 4 inches taller. A Dana 44 solid front axle worked alongside a Ford 9-inch rear axle, making this the last Bronco without independent front suspension. Four-wheel drive remained standard for the second-gen Bronco. A three-door wagon was the only body style on offer this time around.

For the second generation, two V8 engines lived under the Bronco’s hood. Both the 5.8-liter and 6.6-liter V8s produced nearly the same horsepower (156 and 158, respectively), but the 6.6-liter had the torque advantage at 277 lb-ft versus the smaller V8’s 262 lb-ft. In 1979, both variants picked up a catalytic converter that slightly affected horsepower output.

The growing Bronco accomplished a few things. Sharing a base with the F-100 meant new creature comforts like air conditioning and a tilting steering wheel column. This newly grown boy also sold like gangbusters, with Ford pushing 77,917 Broncos out the door in 1978 and 104,038 in 1979.

The oil crises necessitated sleeker, more efficient vehicles. While the Bronco’s dimensions stayed mostly the same for the third generation, the powertrain variety was widened. A 4.9-liter I6 was standard, alongside a manual transmission. The base V8 was a 4.9-liter unit, with a 5.8-liter Windsor V8 and 5.8-liter 351M V8 also on offer. Updates like fuel injection slowly worked their way into the lineup, as well.

In keeping with the second-gen Bronco’s lineage, the third-generation Bronco once again borrowed most of its updates from the F-Series pickup truck line. From the doors forward, it’s pretty much the same as the pickup, including the placement of Ford’s blue oval logo. The Bronco also used the same trims, including the outdoor-themed Eddie Bauer edition that made its way to multiple Ford SUVs in time.

Through the 1980s, Ford didn’t exactly have the greatest history with putting “II” after a name. The Mustang II? Not exactly anyone’s favorite Mustang. Henry Ford II? Let’s… just not go there. Then there’s the Bronco II.

In addition to borrowing looks and body parts from the Ranger, the Bronco II also yoinked its powertrain. Early Bronco II models rocked a 2.8-liter V6 with 115 hp, growing to 2.9 liters and 140 hp in the 1986 model year. A turbodiesel was at one point available, but it wasn’t that good and most people simply skipped over it.

The Bronco II died to make room for the Ford Explorer, but before that happened it was dogged with safety-related controversies. Specifically, the vehicle was believed to be prone to rollovers, and lawsuits followed Ford well into the 1990s.

The fourth-gen Ford Bronco entered production in 1986 with a raft of changes. The new Bronco picked up all the same looks as the eighth-gen F-150, which was also new at the time. It’s a little sleeker, with aero improvements aimed at improving efficiency. The interior was redesigned, too, but that wasn’t for fuel economy’s sake. People just like new stuff.

There were some new technical improvements, as well. The fourth-gen model picked up push-button controls for its four-wheel-drive system, and both the base 4.9-liter I6 and high-output 5.8-liter V8 added fuel injection. Five-speed manual transmissions replaced the old four-speed setup, and the optional automatic transmission gained an extra forward gear, as well.

The final O.G. Bronco came out for the 1992 model year, following the introduction of the ninth-gen Ford F-150. The Bronco was once again aerodynamically improved through tweaks to the front fascia styling, rounding things off to better cut through the air. Features like keyless entry and leather seats made an appearance, too.

The Bronco also received a number of safety updates, including crumple zones and, for the 1994 model year, a standard driver airbag. The removable hardtop also went away, due in part to the fact that the rear seat belts and center-mounted brake light were connected to it. While it was still technically removable, the manual offered no instructions on doing so, and specific bolts were used to keep people from tinkering with it.

Of course, we can’t talk about the final Bronco without mentioning O.J. Simpson. A low-speed chase on Los Angeles’ Interstate 405 put the SUV at the center of a massive media spotlight. While it’s unlikely that this infamous car chase truly affected sales in one way or another, there was a slight uptick in Bronco sales in 1995, just before it went off into the sunset to make way for other SUVs like the Ford Explorer and Expedition.

A quarter of a century has passed since the Ford Bronco disappeared from dealerships, but that’s set to change with the introduction of the 2021 model this year.

While Chevrolet went and turned its truck-based Blazer into a unibody cookie-cutter crossover meant to fill the sliver of white space between the Equinox and Traverse, the Bronco will act as something a bit more specialized. Rocking two different body styles, in addition to a smaller Bronco Sport variant that will certainly be better than the Bronco II, Ford’s latest SUV is ready to recapture buyers that might have flocked to vehicles like the Jeep Wrangler.

With the exception of certain truck trims, Ford hasn’t had a properly bulky off-roader in a long time. Considering the teasers and leaks we’ve seen thus far, it looks like the Big Blue Oval is set to remedy that product gap in a big way.