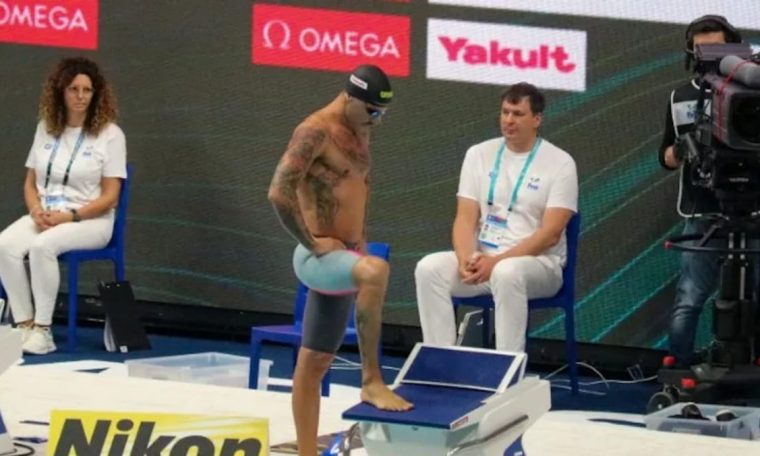 Bruno Fratus enjoys emotions during the 50m freestyle at the World Aquatics Championships in Budapest, Hungary. After setting a best time in the qualifiers, they advanced to the semi-finals in eighth place along with Frenchman Maxime Grouset. The situation forced the two to return to the Arena Duna swimming pool for “Tima-Tima”, only against each other, and the Brazilian lost.

Bronze in the 50 m freestyle at the Tokyo Olympics and a medal hope for Fratus Brazil, owner of three medals from the same event at previous editions of the world, and his excellent participation in the first stage, in which he finished first, 21.71, raised the expectations even further. In the semi-finals, he and Grouset together took 21.83 seconds, so they finished eighth.

Later, due to a personal dispute for last place in the final, the two had an emotional moment when they fell alone in the pool. The very balanced confrontation ended with a win for the Frenchman, who finished the race with a time of 21s59 against Fratus’ 21s62. It was the 100th time Brazil had reached the 50m freestyle mark in less than 22 seconds.

“It’s tough. It’s a lot different than I expected. That 21st that everyone was talking about got a little bitter. That’s what high-performance sports are all about. Sometimes you win, sometimes you lose.” Let’s go”, commented Fratus. “I’ve been on the podium since 2017, at the Worlds, at the Pan, at the Olympics, but that’s it, it’s going back home, training, the Worlds next year, then the Olympics,” he said.

In addition to the sentiments provided by Fretus, Brazil had a 4x200m relay in the final. The team formed by Fernando Schaefer, Vinicius Asuncao, Murillo Sartori and Breno Correa finished the race in 7min04s69, the new South American record, and finished fourth. The podium was formed by the United States, Australia and the United Kingdom.

In other controversies, Vivian Jungblut was ninth in the 800 m freestyle, but advanced to the final after the withdrawal of Australian Kia Melverton, who finished eighth. Gabi Roncato competed in the same event and finished 13th, while Giovanni Diamante finished the 50m butterfly in 22nd place. Matthias Gonche and Vinicius Lanza were 18th and 25th respectively in the 100m butterfly. Competitor Luiz Gustavo Borges was 20th in the 50 m freestyle with Fratus.

In men’s water polo, the Brazilian team was no match for Hungary, losing 20 to 6. With two losses, they are at the bottom of Group A, while Hungary leads with four points and two wins.