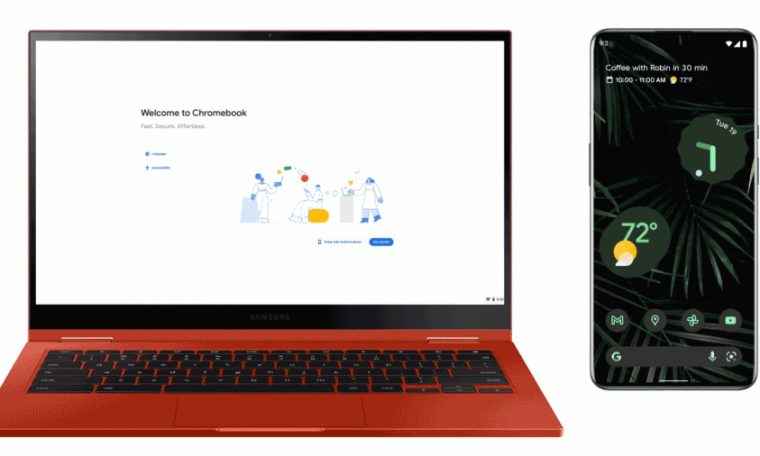 Although it was announced a few days ago that he would not participate in this physical event, but Google is stillThey 2022 announced that the future will be its ownsharp pairChromecast technology will be applied to more devices, among which are planned to make Android devices and Windows operating systems have better connection and sharing experience, and will also strengthen the linkage effect between Android and vehicle devices.

Apple’s ability to quickly exchange files between your iOS devices and Macs via AirDrop, AirPlay, and other functions has been compared to, or further connected with, Apple, although there are currently a number of third-party companies that Apps bridge the gap between Android devices and Windows, but there are still many gaps in the user experience.

Hence, Google this time announced that it will be partnering with Acer, HP and Intel. It is expected that the fast pair function already implemented on Android devices will be brought to Windows devices, allowing users to quickly use the fast pair function to connect Android phones. Laptops and other devices are paired with Windows and added to facilitate later use of message synchronization and faster file sharing through the Nearby Share function.

In addition, Google is also planning to bring Fast Pair function to more smart TVs and networked devices. For example, over the next few weeks, some Chromebook devices will automatically recognize nearby headsets with the Fast Pair function, allowing users to quickly tap and operate. You can complete the headset pairing connection, and even the recently launched Chromebook will use the Fast Pair function. By quickly connecting a user’s Android phone, you can quickly import Google Account information and other information.

In the past, when listening to music with a Bluetooth headset, music playback was automatically interrupted after a call was made, but music had to be replayed manually after the call was hanged. Google said that it will improve this experience with new features. It can automatically resume previously interrupted playback content, just like on Apple devices, making it easier for users to use the Bluetooth function.

In terms of other functions, it will also improve the Chromebook’s phone linkage function. When a message is sent to a user’s Chromebook through an app like WhatsApp, you can reply directly to the Chromebook message bar without downloading another app, and you’ll be sending photo content if you do. , you can even look directly in the message field without having to open a separate page to view it.

At the same time, when a Wear OS 3-equipped smart watch is used for personal use near an Android phone or Chromebook, it can be quickly and automatically unlocked.

Some Samsung phones, Pixel phones and BMW specific models that have been opened beforelinkage functionIn the second half of this year, more Android phones and branded cars will be available for use, and the doors can be opened via mobile phones with built-in ultra-wideband functions, and even directly with mobile phones. Permission can also be given through voice control. Electric vehicles that support the Internet to warm up and turn on. Lock or confirm the current battery level, this function will be available in some Volvo cars over the next few months, and will be opened to support more cars in the future.

Original published in “Co-operative Media”MashdigiAuthorized for reprinting by United News Network. I