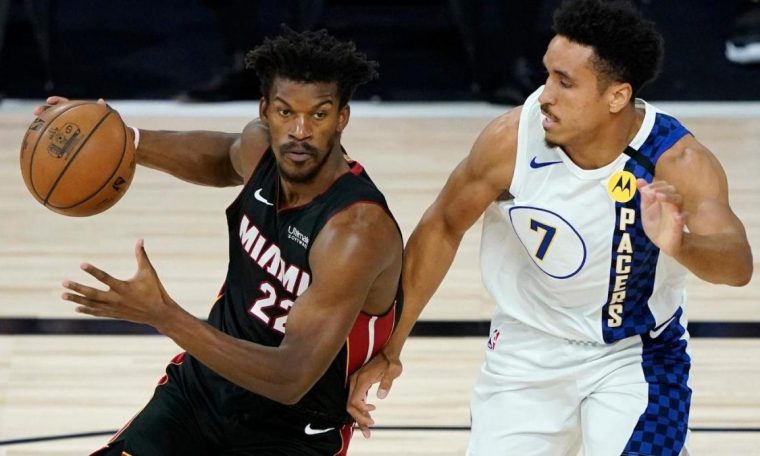 The Miami Heat are on to the second round of the 2020 NBA playoffs. Early on Monday evening, they held off the Indiana Pacers for a 99-87 win in Game 4, completing a sweep of their first-round series. They’ll now await the winner of the Milwaukee Bucks vs. Orlando Magic matchup, which Milwaukee currently leads, 3-1.

In a repeat of other games in this series, the Heat jumped out to a double-digit lead and then did enough to close things out down the stretch. This time, they got a big boost from their bench, which scored 41 points. Jimmy Butler left the game with a shoulder injury and missed a large portion of the first half, and though he was able to return after the break, he was clearly playing through some pain. That will be something to pay attention to heading into the second round.

This is the end of the road for the Pacers, who have now lost in the first round in each of the past five seasons. They had a really solid season, but were without Domantas Sabonis and Jeremy Lamb for the bubble, and Victor Oladipo had still not returned to his pre-injury form after returning earlier this season from a ruptured quad tendon. They deserve credit for how they competed but just didn’t have enough to deal with a tough Heat squad.

Here are three key takeaways from the game:

Jimmy Butler left Game 4 in the middle of the first quarter due to a shoulder injury and was initially questionable to return. After halftime, he emerged with a giant wrap on his shoulder, as well as some tape, and proceeded to finish out the rest of the game. He did so, however, through obvious pain.

Butler may as well have been playing one-handed throughout the second half, as he used his left arm as little as possible. The most obvious moment came late in the third quarter, when he posted up, made a great spin move towards the baseline, and appeared to have an easy left hand layup. Instead, he tried to go up with his right, and had the shot blocked.

During his walk-off interview, he admitted that he had been dealing with a shoulder issue coming into the game, and promised that he would be alright. You would expect nothing less from him, as he’s one of the toughest players in the league, but this still has to be concerning for the Heat.

Assuming the Bucks close out the Magic on Wednesday, they’re set for a second-round matchup with one of the best teams in the league and will need Butler at full strength. If he’s playing one-handed as he was in the second half against the Pacers, that’s a huge blow for their hopes at pulling an upset.

The Heat had one of the best bench units all season long. Led by Goran Dragic — who is now starting — the Heat reserves were sixth in the league in the regular season, scoring 41.8 points per game. The only playoff team that had a better bench was the Los Angeles Clippers.

But while Dragic is now the starting point guard, Miami still has some firepower off the bench, and that group came up huge in Game 4. They didn’t quite manage the 100 points that the Toronto Raptors’ bench unit put up in their Game 4 win, but Miami’s back-ups outscored the Pacers’ 41-3.

That’s a huge margin in any situation, but especially in a low-scoring game, and with Butler hampered by his sore shoulder. Tyler Herro led the way, finishing with 16 points, five rebounds and four assists to continue a very impressive playoff debut. In his first four playoff games, Herro is putting up 16.5 points per game, and shooting 36.4 percent from 3-point land.

In addition to Herro, the other notable performance off the bench for Miami came from Kendrick Nunn. He only finished with seven points in 14 minutes, but this was the first time he’s suited up all playoffs after dealing with COVID-19. Getting him back in the lineup is a nice boost for the Heat heading into the second round.

On the first possession of the third quarter, Bam Adebayo took a pass from Duncan Robinson, and instead of running one of their familiar dribble hand-offs, drove middle and with his left hand whipped a pass out to the wing, where Goran Dragic buried a 3-pointer.

It was a ridiculous pass for a center to make, but it highlighted just how skilled Adebayo has become. In the regular season, he became the second-youngest player ever to average at least 15 points, 10 rebounds and five assists per game, and now he’s doing it again in the playoffs.

He finished Game 4 with 14 points, 19 rebounds and six assists, and added a steal and a block for good measure. Over the four-game sweep, the Heat’s net rating with Adebayo on the floor was plus-19.3 points per 100 possessions, and when he sat it was minus-13.6.

Though he might not get all the attention, Adebayo is one of the best and most important players on this Heat team. Against the Bucks, they’ll need him even more than usual, as they look to slow down Giannis Antetokounmpo. Based on how he played against the Pacers, it’s safe to say Adebayo will be up to the challenge.