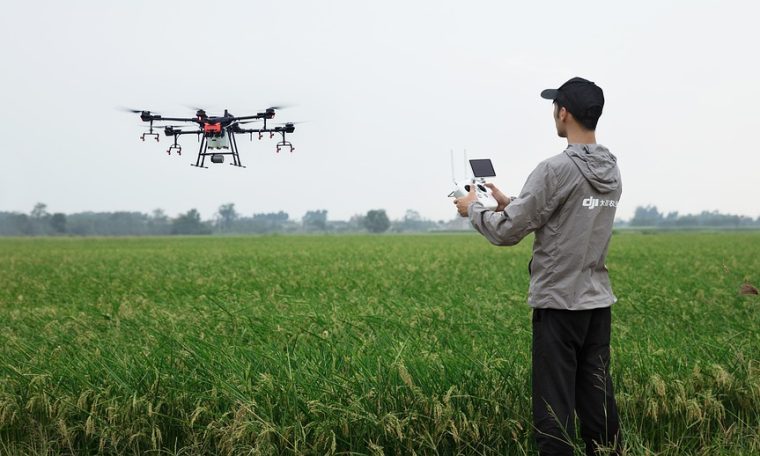 As climate change ravages our harvests and threatens the world’s food security, technology in agriculture — or agritech — is becoming more important than ever. The urgency of the situation has research firms estimating that agritech’s market size will triple by 2025.

Agritech offers farmers a variety of applications meant to maximize crop yield despite increasingly harsh weather conditions. One such application is aquaculture, which we’ve discussed as facilitating the more efficient use of water as it becomes scarcer due to climate change.

Another innovation is the drone. Though initially used in the military and for agriculture, its versatility is helping farmers at all points of the production process. Here’s how.

Through drones, farmers can use data science to determine how best to maximize their harvests. On-board sensors and precise GPS technology, drones allow for the full and immediate visibility of a field. This input, along with that from other methods like soil sampling, helps precision farming software map fields to determine where best to plant a specific amount of a particular crop at a given time. Drones can then plant these seeds with equal evenness and precision. Farmers consequently get to use their resources more efficiently and can reap optimal yields despite inconsistent factors like the weather.

The increased visibility drones provide can answer a variety of agricultural needs. This is thanks to high-definition drone cameras that come in a range of resolutions and are enhanced by a variety of sensors. Spectral imaging technology allows drones to immediately spot yellowed plants, while air sampling sensors can even detect airborne pathogens like Fusarium graminearum, which can ruin crops like wheat and corn. Farmers can then address concerns as they happen, saving their crops from being damaged by things like sudden climatic events.

Thanks to thermal and laser-mapping sensors, drones can help farmers determine which parts of a field dry out faster, where water tends to pool, the direction in which water flows over the land, where plants like trees prevent erosion, and even where irrigation equipment may be prone to leaks. All these things can help inform efficient irrigation strategies that prevent water waste over time, which is crucial especially in times of unprecedented drought. Farmers can even take it a step further by using drones to evenly water plants or spray them with fertilizer. Some manufacturers even allow farmers to coordinate multiple drones over a larger area and are developing technologies to prevent drift, which occurs when wind causes sprayed liquid to miss its target.

Bees’ pollination of crops contributes a whopping $15 billion to the US economy. Yet climbing temperatures are causing bee populations to dwindle rapidly. Drones help by serving as an alternative crop pollinator. Pollen is first extracted from flower buds or shaken from trees with the same machines used to harvest nuts. It then goes through a purification process to prevent the spread of disease before being distributed by a drone. This has the double advantage of giving time for bee populations to recover without negatively impacting food security.

With the climate crisis well underway, it’s clear that we need to lean on our technological knowledge to pull us through. The use of drones exemplifies how we can make production more effective without compromising on sustainability — and how we can begin with agriculture, an industry that sustains us all.