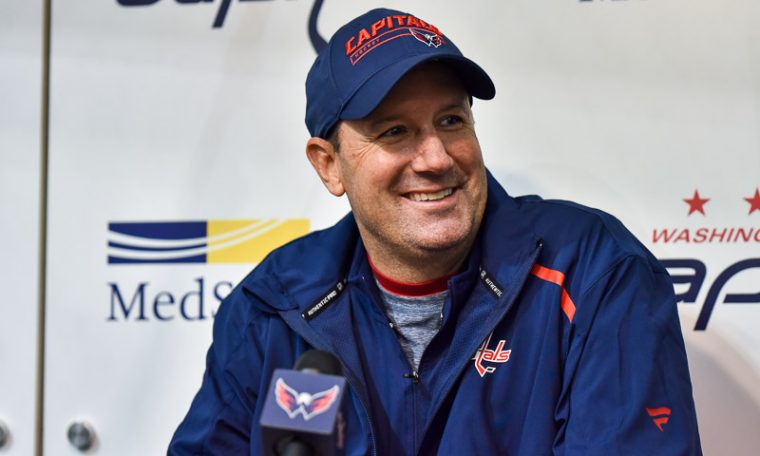 The Washington Capitals are down 3-0 to the New York Islanders and may get swept Tuesday night, ending a season that started with so much promise. It would mark the second consecutive first-round exit for Todd Reirden’s Washington Capitals.

The emerging storyline goes like this: Barry Trotz is out-coaching Todd Reirden. The Capitals’ former Stanley Cup champion head coach, who led the Caps to the promised land in 2018 and then abruptly left the team, is taking his former assistant to school with superior hockey brainpower and experience.

I’m not sure I completely buy it. Barry is still the second losingest coach in NHL history and one time, he scratched Nate Schmidt for Mike Weber in a playoff game. But I’m also not sure I could convince you not to believe it.

Regardless, this beatdown has been so thorough that changes, perhaps big changes, will need to be made because it’s clear that this [gestures broadly at everything] isn’t working.

The Capitals are more talented and experienced than the Islanders, but the Capitals are still getting absolutely pummeled at 5v5. Beyond exemplary performances from Alex Ovechkin and Braden Holtby, the Caps have looked an empty shell of itself. They seem content to play on the perimeter and try to needle pucks past five guys in the offensive zone. Ultimately, the players’ performance, motivation, and conditioning fall on the head coach and the rest of the coaching staff. They are the leaders. The buck stops with them.

That’s why, if there is a mandate to make big changes, Todd Reirden will be the first to go. Unless the Capitals can do what only four other teams in NHL history have done — dig itself from a 3-0 hole and win a series — Reirden will likely be out at the end of this season.

Every Capitals coach hired since 1981 who didn’t win a playoff series in their first two seasons didn’t get to coach into a third except for Glen Hanlon (who was in a rebuild.)

Winning is magic. Winning absolves coach’s of their failures and erases the murmurs of “he lost the room.” If the Caps would have squeaked out an undeserved win in Game Three, all of these numbers would be cast in a different light.

Firing Todd Reirden is an easy fix. It would be an injection of hope to the fanbase. But the team’s playing core is under contract for the long term, and the team has already verbally committed to keeping Alex Ovechkin for the rest of his career. The most substantial part of this team isn’t going anywhere.

But what if the Caps fire Reirden and then discover that the real problems remain. What if something is systemically wrong here, and swapping coaches is just changing the salad dressing on a bed of rotting lettuce (except you, Ovi, you, my dear, are the one delicious baby corn in there).

What if Reirden is a good coach? What if this Reirden vs. Trotz narrative is oversimplifying something way more complicated? For instance, every statistic you look at, beyond playoff performance, suggests that Reirden is good.

Oh no, I embedded the video.

Yup, there’s Mike Weber deflecting a puck directly to Patric Hornqvist for the game-winning overtime goal after I begged Barry not to play him earlier that day.

Then there’s this: What if the Capitals’ terrible showing in the playoffs is completely random? What if the unprecedented five-month layoff due to the coronavirus pandemic and the 24-team playoff format, which had the Capitals playing important games later than the Islanders, gave the Isles an advantage?

How much should we make of this year’s playoff disaster is up for debate.

I think the way we evaluate Reirden is colored by how things ended with Trotz too: winning the Stanley Cup. No matter what shortcomings Trotz had as a coach (he went into the season as a lame-duck and was nearly fired several times during the season), they were wiped away when he led the team to its first championship. We will always look at him fondly.

As Trotz left for greener pastures (and I mean, greener) in New York, Reirden, his protege, received the opportunity to be an NHL head coach for the first time. But with that opportunity came the unenviable task of trying to improve on the virtually un-improvable: winning the Stanley Cup. I guess you could win a championship gooder and more thoroughly right?

Reirden’s expectations were sky high, while Trotz, when he first came to the Capitals organization were low: just get back into the playoffs after Adam Oates wrecked the joint.

All of this is to say that from the outside, I think we unfairly criticize Todd’s performance as head coach of the team. Does that mean he should get an opportunity to coach the team next year if the team is swept? I don’t know.

There may be problems with this team regardless of the coach:

If the Capitals end up losing to the Islanders, which is nearly a statistical guarantee at this point, this fall’s offseason will be crucial to determining if any more Cups will be won during the Alex Ovechkin Era. Since winning it all in 2018, the Capitals have still won like they used to in the regular season, but they have failed to find that next level in the playoffs. They seem less hungry.

It’s going to be hard to aggressively change up the roster with a flat salary cap. So maybe changing coaches is the most aggressive thing they can do. All I ask is that if they fire Reirden, don’t talk of him like he was bad at his job. Maybe it’s time for us to be more skeptical about the roster.