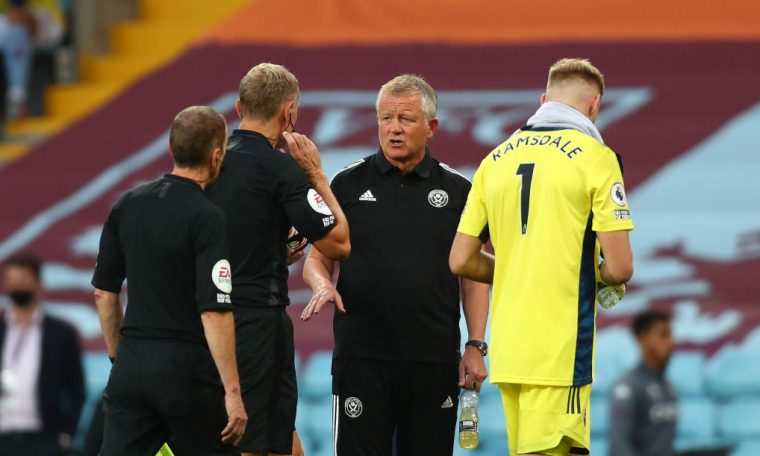 Sheffield United boss Chris Wilder described himself as “completely confused” as he mourned calls from authorities about his team’s 1-0 defeat at Aston Villa.

Wilder claimed that there were “bad decisions” against the Blades at Villa Park, where Izri Konsa was leading the 63rd minute winner.

The visitors were reduced to 10 men in the 12th minute when skipper John Egan was given a straight red card by referee Graham Scott, who fought Oli Watkins and was given the chance to give the striker a chance to score. Refused.

Wilder felt he shouldn’t have had a red card at the time, and it should have been shown to a Villa’s Matt Target – instead of a yellow one – when his match against Chris Basham was awarded to Sheffield United in the 36th minute. In both cases, there was a VAR investigation of the incident.

The spot-kick was taken by John Lundstrom, who saw his hard work saved by Emilino Martinez.

Wilder said: “In my opinion, two bad decisions are coming to an end.

“For me, both (Egan and Watkins) were arguing with each other. I just don’t understand why this decision was so red.

“When I look back at both situations, I don’t think the right decision was made.

“There’s no way in a million years Matt Target can bend his leg and try to play the ball, so he stops our player who is going to tap it, to give it a chance to score. Denies, and it’s a red card. Even though we lose the penalty, it’s still 10 to 10, which has a huge impact on the game.

“Maybe I need to go to a referee’s course. I think we all need it because there’s so much confusion about things like that.”

Wilder, whose side was known for the failure of a goal line technology at a recent visit to Villa Park, added: “You (want) consistency and the right decisions, and of course on our last two visits, we didn’t get it.

“I am just confused. Having been a professional player and manager for the last 34, 35 years, I am most confused about the game and the decisions I have made.

“I was confused over the weekend watching handball, and I’m even more confused tonight.”

With his team winning their Premier League campaign, Villa boss Dean Smith was full of praise for Debt Martinez, the latest signing from Arsenal, and defender Concepcion.

“He (Martinez) did what he had to do tonight – he was calm on the ball, he made a really good save for the penalty. Certainly he is a good sign for us, we believe.

“Ezri Conas was great tonight. We’re doing much better defensively. There were signs of a knockout tonight, but I thought we were a good winner.”