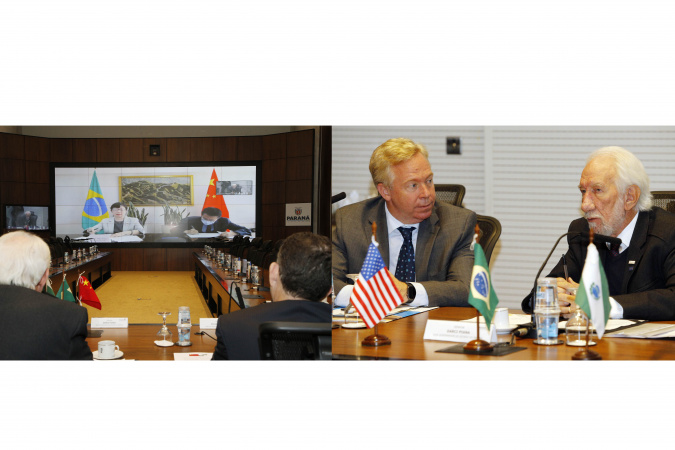 On Tuesday (10), Deputy Governor Darcy Piana met US Consul General in So Paulo, David Hodge, at the Palacio Iguaçu. He also participated in a virtual meeting with Consul General of China Chen Peiji. In general, the presentation of the potential of Paraná with the possibility of business exchanges and technical cooperation.

“Paraa is passing through a good moment with a range of possibilities for investment, mainly structural, such as highways, railways and airports,” Piana said.

He gave details of programs under development in the state, such as Woh Parana, for regional aviation, the conquer the worldExchanges in Education, and Nova Ferroeste, the railway network that will connect Maracaju (MS) to Paranagua Port – the project will be auctioned on the So Paulo Stock Exchange (B3) in the second half of the year.

“We are the country’s first corn producer and largest chicken exporter, a major food producer, always focused on sustainability. We have car factories, a solid economy and we need partners to invest”, he Prakash Dala. “There are many business opportunities.”

Consul David Hodge said that his country is very interested in doing business with Paraná and investing mainly in agriculture. “We want to promote the partnership between Brazil and the United States in the areas of telecommunications and health. There is a lot of interest from the private sector to invest in Brazil,” he said.

For China’s consul general, the country’s commercial partnership with Paraná is already strong, especially in commodities such as soy, wheat and corn. However, according to him, with the emphasis on ongoing infrastructure projects in the state, the relationship is likely to escalate. “I was able to get to know Paraná better, learn about the strengths and advantages of the state. The consulate can act as a bridge between the state government and Chinese businessmen,” Chen Pg said.

A state delegation will be formed in the coming months with an aim to explore new business prospects in the eastern country.

partnership and sustainability – Piana also highlighted the importance of Investing Paraná in the administration of the state – the agency acts as a bridge between the government and the private sector, collecting data, providing information and strategizing for attracting new business and prospecting Helps in decision making.

“The approximation between the business community and the government has brought significant results. This will change the state. This volume of trade, our agribusiness exports, all this has brought great results for Paraná”, he said.

According to Invest Paraná’s CEO, Eduardo Bequin, the state has already exceeded $120 million in investment from the private sector, and one of the biggest concerns for doing good business is sustainability.

“Paraa was the first state to create a public and private committee (ESG), focused on environmental, social and corporate governance. When we talk about sustainability, we talk about reverse logistics, social work “Investments are welcome as long as they act strongly in terms of sustainability. Agribusiness has more than 25% protected areas, but it has to be shown”, he said.

fly parana Piana also introduced the guests to Vo Paraná, the country’s largest regional aviation program. The idea is to connect the interior with the capital, and consequently with the rest of Brazil. Cianorte, Telêmaco Borba, Arapongas, Campo Mourão, Apucarana, Guaíra, Francisco Beltrão, Cornélio Procópio, União da Vitória and Umuarama are connected to Curitiba with weekly flights operated by Azul Linhas Aéreas. The program serves as an incentive for regional tourism, which employs many people, and favors the development of local communities.

education – In addition, projects in the field of education were raised, such as the international exchange program Gaining the World, created by the Secretary of State for Education and Sport, which provides training for high school students in foreign educational institutions whose Passed equivalent course. For secondary education in Brazil. The youth are selected on the basis of ranking of best grades in the state schools.

To improve the language, selected people will have access to an English curriculum through the app, which will be offered in partnership with state universities affiliated with the General Superintendence of Science, Technology and Higher Education.

Piana also stressed that besides financial education, entrepreneurship and robotics classes in all schools in the state, English is mandatory to enable children to deal with the language of technology.

The deputy governor also highlighted the potential of higher education in Paraná with the administration of seven universities across the state. “There are 5,500 doctoral and master’s students in Paraná to work on business integration and development. We are ensuring that each university has programs to improve the regional productive sector, while working according to the needs of local production”, He concluded.

Presence – Giancarlo Rocco, Director of International and Institutional Relations of Investment Paraná, participated in the meetings; Paulo Fernando Pinheiro Machado, Secretary of the Representative Office of the Ministry of Foreign Affairs in Brazil (Erepar); Deputy Consul for Administrative Affairs Matthew Phillip; and Arlet Salvador, political adviser to the US Consulate.