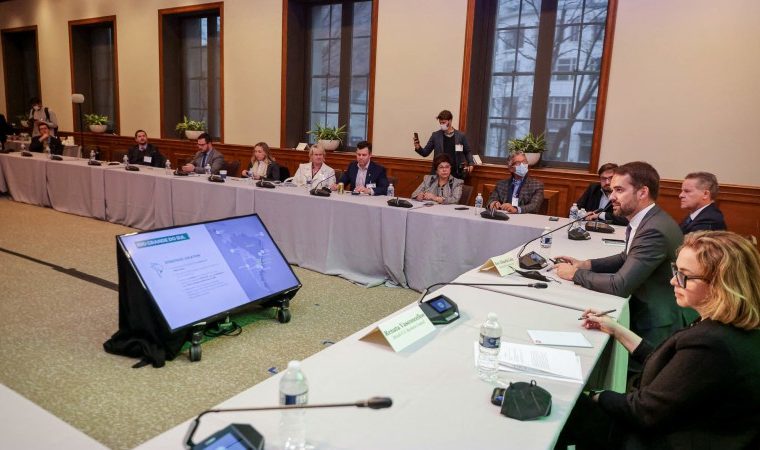 This Wednesday (9/3) in Washington DC, Governor Eduardo Leite and the group of secretaries who make up the state delegation attend a meeting at the US Chamber of Commerce. The LEET was welcomed by Renata Vasconcelos, Senior Director of Public Policy at the Chamber of Commerce’s Brazil-United States Business Council.

“The camera naturally operates with expectations. Every investment has expectations regarding the future. Therefore, there is a lot of hope in relation to the Brazilian tax system, which will become more logical, more rational to do business. Our tax system Extremely complex, sometimes incomprehensible even to Brazilians, and there are hopes that reforms will be carried out in the coming years to make Brazil a more interesting place to invest. The social security and administrative reforms we have undertaken attracted a lot of attention and was even cited as an example of what needs to be done in Brazil,” Leite pointed out.

A regulatory environment that provides protection for those who are going to invest, greater economic freedom to do business and the simplification of a complex tax system are some of those presented by a group of representatives of the US Chamber of Commerce regarding Brazil. There were demands.

Visit the Embassy of Brazil

Prior to the meeting at the Chamber of Commerce, Leite and the delegation were received by Nestor Forster Jr., Ambassador of Brazil to the United States. Traditionally, the embassy has been a facilitation point between the country and the US, as well as an intermediary between Brazilian and American companies.

“This was another opportunity for us in the US to discuss and present our agenda and the way the embassy can help us with matters of state interest”, Leite explained.

Ambassador Forster Jr. highlighted that Leite was the first governor to visit the embassy since the start of the coronavirus pandemic in 2020. After the meeting, the state delegation attended lunch at the Ambassador’s official residence.

Also this Wednesday (9/3) the Governor visited the headquarters of the energy company AES Corporation. The theme of the meeting was investment opportunity in RS for production of green hydrogen.

“We want AES to participate in these studies, which will attempt to pinpoint the feasibility of RS as a state for the production of green hydrogen. We believe this is an important business that RS needs to make.” In addition, we had the opportunity to invite you to participate in the South Summit (4-6 May in Porto Alegre), with their companies and startups engaged in innovation in the energy sector, with the opportunity to interact with other companies investment funds, along with everyone we wish to participate in the South Summit to take advantage of RS’s position in innovation and technology”, Leite said.

In December last year, the state government signed a memorandum of understanding with the company White Martins for the implementation of Hidrogonio Verde – Construir and developing the renewable energy program in RS.

RS has studied to transition to decarbonization through the use of green hydrogen, creating a new branch in the economic matrix of high technology and added value. The state already generates 80% of its energy from renewable sources, with about 20% from wind power, which still has large expansion potential.

The use of green hydrogen meets a commitment assumed by the RS to neutralize carbon emissions in the state by 50% by 2030, a goal also considered by Brazil in the Paris Agreement.

In November 2021, Leight participated in the United Nations Climate Change Conference (COP26) in Glasgow, Scotland, to reaffirm the state’s commitment.

The implementation of a public policy for the production of green hydrogen was also the subject of a meeting at the International Finance Corporation (IFC), the financial arm of the World Bank Group.