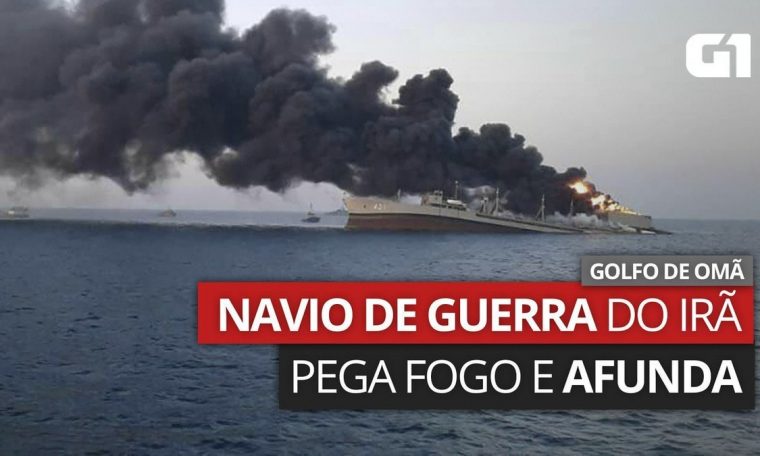 largest naval warship in Will A fire broke out and sank in the Gulf of Oman this Wednesday (2), news agencies in the country reported. Until the last update of this article, the reasons were still unclear.

The fire started around 2:25 pm (local time), and the Fars and Tasnim news agencies reported that efforts to fight it were not enough to save the support vessel Kharag. According to Fars, all attempts to save the ship were unsuccessful, but the crew was rescued safely.

An undated image of Iran’s largest naval battleship, the Kharag, in a photo provided by the country’s military. On June 2, 2021, Kharag caught fire and sank in the Gulf of Oman. – Photo: AP. through the Iranian army

The ship’s name is derived from the island that serves as the country’s main oil terminal.

Kharg sank near the Strait of Hormuz, on the Gulf of Oman, about 1,270 km southeast of Tehran, near the Iranian port of Jask. (see map below), Through which about one fifth of the world’s oil is spread.

Images posted on Iranian social media show sailors in life jackets pulling out of the ship as a fire burns behind them.

Kharag, Iran’s largest naval warship, catches fire and then sinks in the Gulf of Oman on June 2, 2021 – Photo: Asriran.com via AP

Image taken from a video released by the Asriran.com website on June 2, 2021, shows smoke rising from Iran’s largest naval battleship Kharag, which caught fire and sank in the Gulf of Oman – Photo: Asriran.com AP Through this

According to the Associated Press news agency, Kharag was one of the few Iranian Navy ships capable of refueling other ships in the fleet at sea.

It can also lift heavy loads and serve as a starting point for helicopters.

The battleship was built in Great Britain, was launched in 1977 and after lengthy negotiations was inducted into the Iranian Navy in 1984.

In recent months, the country’s navy has launched a slightly larger commercial tanker called Makran, which has been converted to function similar to the Kharag.

Iran’s navy usually patrols the Gulf of Oman and the wider seas of the region, while the country’s Revolutionary Guard operates in the Strait of Hormuz and shallow waters of the Persian Gulf.

Iranian officials have yet to report the cause of the fire in Iran’s latest naval disaster, Kharag.

In 2020, during an Iranian military training exercise, a missile accidentally hit a naval ship near the port of Jask, killing 19 sailors and injuring 15. In 2018, a destroyer sank in the Caspian Sea.