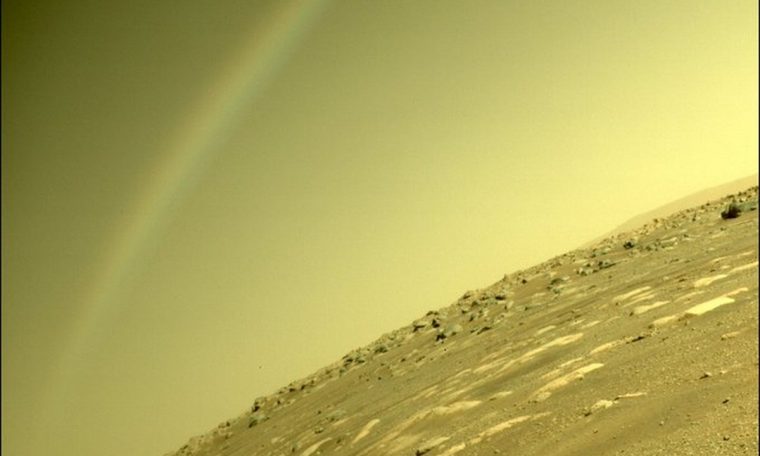 After the publication of a picture of the atmosphere of Mars attracted attention on social networks, NASAAn American space agency explained the origin of the incident on Tuesday (6). What is believed to be a rainbow is, in fact, a phenomenon caused by the reflection of light in a photographic lens.

“Here (on Mars) rainbow is not possible“NASA said on Twitter, the official robot account of Perseverance. Rainbow rounds are created by light reflected in water droplets, but there is not enough water here for condensus and it is too cold for liquid water in the atmosphere. This arc lens. Is a reflection of this ”, the agency reported.

A rainbow appears when sunlight flows through water droplets in the air. On Earth, they are common after rain. Sunlight falls on the water droplets and refraction occurs, which causes sunlight, which is white, to decompose into the seven colors that make up its spectrum: red, orange, yellow, green, blue, Indigo and Violet.

But even the prerequisites that are on Earth, rainbows are not always seen, because they depend on the angle of incidence of light in the water droplets in the atmosphere, and also on the position of the observer.

“Flare” or “lens flare” is a “flaw” in capturing an image when light enters through the loops of the cameras’ lenses. The problem can lead to different types of stains, with circular or hexagonal ones being more common.

On February 18, the Perseverance Robot landed on Mars, Seven months after the mission left the United States. This is not the first time that NASA has sent robots to the red planet.

Previous missions found that, before becoming an icy desert, Mars was warm enough to harbor liquid water. The mission of perseverance will now take the next step and try to answer one of the big questions in astronomy: Are there any tangible signs of microorganisms spending on Mars?

The robot will also collect a sample of rocks that will be brought to Earth in the future and test leading technologies for the final human presence on the red planet.