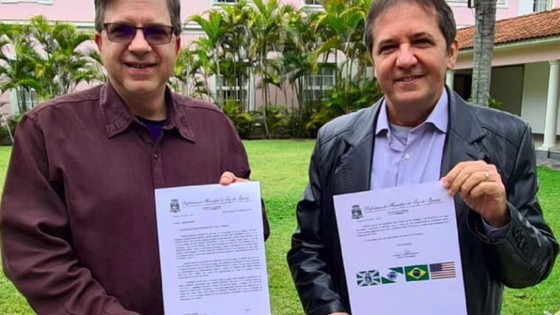 After formalizing a mutual cooperation agreement with Governor Ratinho Jr., US Ambassador to Brazil Todd Chapman on 17 June met with the Mayor of Foz do Iguaçu Chico Brasileiro this Sunday (20) to discuss a range of topics . Among them, the possibility of supporting a direct flight between Foz do Iguaçu and Miami.

This is the second time Chapman has visited Foz do Iguaçu in less than a month. On 27 and 28 May, he was in town to learn about the environmental work of the Itaipu plant and Iguaçu Falls. Chapman was accompanied by a group of eight other ambassadors who came to the municipality at the invitation of the Minister of Mines and Energy, Bento Albuquerque, and the Director General of Brazil, Itaipu, General Joo Francisco Ferreira.

At the time, the ambassador to the United States was very excited by what he saw. Mayor Chico Brasileiro attended a dinner with a group of ambassadors. During the visit, Chapman said Brazil is a key partner in building a sustainable future.

On Sunday’s visit, Chico Brasileiro wished the US ambassador not only to visit the Iguaçu Falls, but to keep fond memories of Foz do Iguaçu for welcoming the population and all the richness of the local natural environment. The mayor sought support in promoting Iguaçu National Park in favor of the conservation of the biome, which is home to a great diversity of fauna and flora species, some of which are on the verge of extinction.

In connection with the Foz–Miami–Foz flight, Mayor Chico Brasileiro asked Chapman for help promoting the local airport, which was recently expanded, to become an international air mobility hub and now receives long-haul flights. , such as those from Europe and North America.