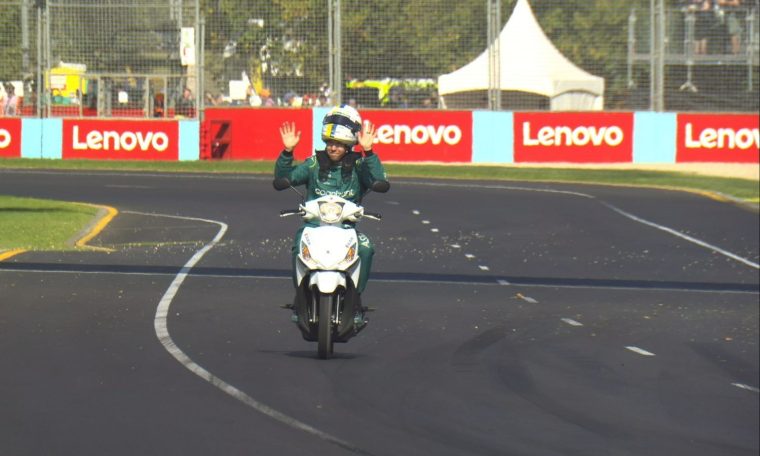 Sebastian Vettel was one of the highlights of free practice for the Formula 1 Australian GP, ​​but on a scooter. As the first session was about to come to an end, the German driver suffered a breakdown in his Aston Martin AMR 22 and had to park it in one of the escape areas of the runway.

After the end of free practice, the German driver borrowed a Suzuki Address 110 scooter from one of the track marshals, and took the opportunity to ride around the track and greet his Australian fans.

However, Vettel’s attitude is contrary to F1 rules, which prohibit the presence of people on the track without authorization in the minutes after the end of practice, And he fined 5 thousand euros, which in direct conversion was around R$ 26 thousand.

The Miniature 110 is the only scooter available in Suzuki’s Australian line-up. It is powered by an air-cooled 113cc single-cylinder engine and a CVT automatic transmission. Suzuki announced that the model is capable of running 100 km with just 2.1 liters of fuel, and offers a range of 247 km with a tank, which has a capacity for 5.2 liters of gasoline.

There is a storage compartment under the seat with a capacity of 20.6 liters, which has enough space to keep a full face helmet and a few other small items. On the front of the Address 110 are two bag holders, as well as a bag hook. The front suspension of the Suzuki Address 110 is equipped with a common telescopic fork, while the rear uses a monoshock. The brakes are a combined system (CBS), with discs at the front and drums at the rear.

If you too are a fan of speed like Vettel, then know that you can make the Address 110 look sportier, as Suzuki offers a set of stickers as an accessory that will leave the scooter as the GSX-RR. Joan Mir and Alex are using Rins to compete in MotoGP.

Address 110 is sold by Suzuki Australia for 3,890 Australian Dollars, approximately R$14,000 in direct conversion. That is, Vettel paid a fine more than the cost of the scooter. We hope he at least had fun with Suzuki on the Albert Park circuit. Watch the tour of the German – who misplaced his helmet, by the way – in the video below: