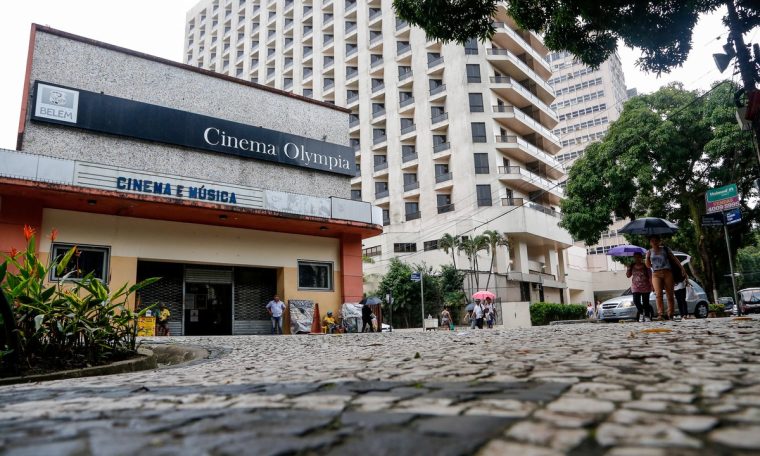 Cine Olympia, considered the oldest theater in Brazil, turned 110 this Sunday (24). A National Historic Landmark, Olympia has featured major productions on the big screen, from the greatest silent film classics to the movies of Hollywood’s heyday. But on this birthday your lights are off and your doors are closed. There is no audience or film on display. About two years ago, the restoration work here was suspended, which started this month.

“Olympia’s birthday month and it’s closed. Embarrassing”, explains Pedro Veriano, a film producer, physician, critic and film researcher at Para. Considered a living memory of seventh art created in the Amazon, he has published several books on the subject, and is responsible for a fundamental portion of the record of the audiovisual history of northern Brazil. Fearing about the future of Olympia, he criticizes what he considers to be negligence by the government, which has been in the custody of the city of Belém since 2006, and demands an act before the venue. “Sunday, I must go to Olympia’s birthday. Everyone there”, says Veriano in his social network.

wanted by g1, Cultural Foundation of the Municipality of Belém (Fumbel), commented on the matter. According to President Michel Pinho, the pandemic postponed the start of space revitalization works for two years. “In 2021, we had a budget focused on the fight against Covid-19. Efforts were that we could vaccinate as many people as possible in less time. As the fiscal year moved to 2022, we left no stone unturned to design a project that involved the immediate renovation of the roof, which is the most critical point of the building. The Department of Urban Planning, which actually does the renovations, was very efficient in obtaining authorizations for property renovations that are listed in three areas: municipal, state and federal”, says Fumbel’s president. According to Mitchell, this part of the revitalization Repairs in the first phase will focus on renovation of the roof, roof and electrical.

Initially thought to serve the elite of the time, Olympia was inaugurated on April 24, 1912 by Brazilian businessmen Carlos Teixeira and Antonio Martins, a fruit of the Béla poque paraes.

The period is known for the ‘rubber cycle’, which, along with increased exports of the product, financed and promoted economic, cultural and architectural exchanges with Europe and the United States.

It was this moment that exposed the history of cinematography in Belém, where the cinema, along with a room, was a meeting point for society, besides being considered one of the best, most spectacular and modern of that phase, in which art Nouveau inspired the architecture of the place.

With 434 seats and a 10 by four meter screen, the cinema began programming with screenings of silent and black-and-white films, mainly starring Rudolph Valentino, one of the first icons of pop culture and who ‘ Acted in films like ‘Os Four’. Horseman of the Apocalypse’ and ‘Son of Shek’.

“Cinema Only” did not pass through the digital era over the past ten years, but the history of cinematographic reproduction can still be told with the old projectors that are still in the building”, explained Michel Pinho, president of the Cultural Foundation of Belém (Fumbel).

The 1929 musical comedy ‘Alvorada do amor’ was the first sound feature film shown by Olympia on November 30, 1930. In the same decade, it was shown. one of the biggest box office ‘King Kong’, directed by Marion Cooper and Ernest Schoedsack.

Between the 30s and 40s, the Olympia cinema was sold twice. After 41 years of operation, in 1953, students asked for renovations in the place, which only happened in 1960, with the advent of armchairs and air conditioning.

In 2006, the city of Belém took over the cinema, at a time when the administration was facing financial difficulties and was about to close the place.

On the verge of 110 years, the Cine Olympia Belem marks an important chapter in the history of cinema

With the completion of the renovation, which has just begun, it is expected that, when it reopens to the public, Olympia will be even more valuable, an event involving the gathering of the entire public, especially film-watchers. will be prepared.

“Generations have lived leisure time with family, with relationships. Whenever I watch old movies, I imagine how many people were there, who felt good there, who had lived with their father, mother, brother, girlfriend. recorded memories with. , or wife. It is always more than a manufactured building”, emphasized researcher and film critic, Marco Moreira.

For the president of Fumbel, Olympia’s mission is to transmit audiovisual culture to Belém. “The mere fact that it is a street cinema in which the cinemas are in shopping malls already shows us the uniqueness. In Brazil, and in the world, it is the pearl of the rubber period that resists to this day”, he said. inserted.