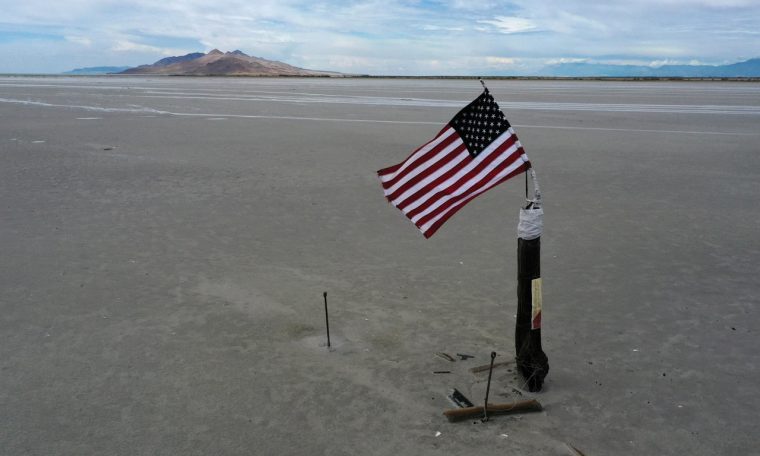 An American flag flies in the Great Salt Lake that used to be waterlogged near Magna, Utah. As severe drought continues in the western United States, water levels in the Great Salt Lake, the largest saltwater lake in the Western Hemisphere, have dropped to the lowest level on record. A further drop in the lake water level can result in an increase in water salinity and dust generation from the exposed lake bottom which can affect the air quality in the area. The lake does not provide water or electricity for neighboring communities, but it does provide natural habitat for migratory birds and other wildlife. , Justin Sullivam/Getty Images/AFP/Metsul Meteorology

One of the largest lakes in the United States reached its lowest level this week, amid a dramatic drought affecting the North American West. The level of the Great Salt Lake in Utah naturally fluctuates due to precipitation, but its volume has never fallen so low, reaching its all-time record since the first measurement in 1847. The previous record is from October 2021, according to the United States Geological Survey (USGS).

The agency warned that, based on records, lake levels will continue to fall until the last quarter of the year, “when the amount of water entering the lake is equal to or greater than the amount of water lost through evaporation.” “This is not the kind of record we want to break,” Joel Ferry, director of the Utah Department of Natural Resources, is quoted in the text.

“Urgent action is needed to protect and conserve this indispensable resource. It is very clear that the lake is in peril.” Utah officials estimate that the Great Salt Lake contributes $1.3 million annually to the local economy thanks to mining, tourism, and fisheries.

The seasonal water supply forecast for the entire Great Basin (not including GSL) is 50-60% of the 2022 average. pic.twitter.com/8qkRV2mcgC

Shrinking of the lake also threatens many species of migratory birds that stop on it and can affect the health of local populations. Scientists recently warned about arsenic-rich sediments at the bottom of the lake that have been exposed to drought. Propagated by wind, they can pose a risk of poisoning to the population.

For years, the western United States has been experiencing a severe drought, a product of climate change mostly caused by human action and the indiscriminate burning of fossil fuels. Reducing water supplies and raising temperatures, this chronic drought is about to transform a region that is experiencing extreme weather more frequently.