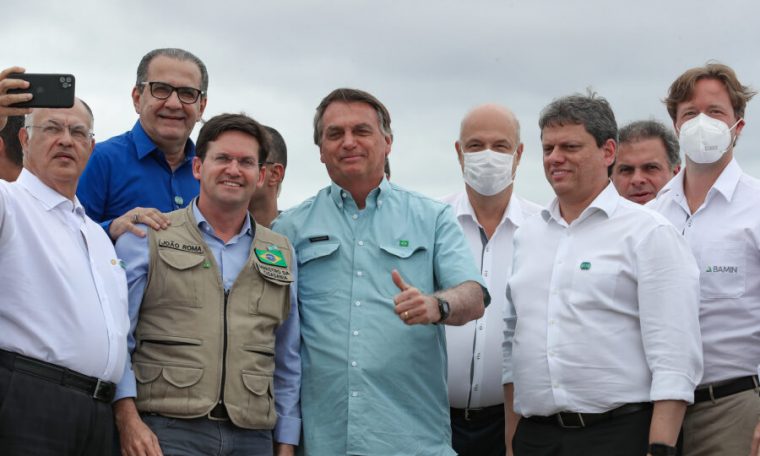 The Palacio do Planalto has issued a legal opinion to shield itself from accusations of early election campaigning for promoting at least 27 events in all states and the Federal District on the pretext of celebrating the Thousand Days of the Jair Bolsonaro (non-party) administration. Prepared.

Amid economic, sanitation and water crises that are raising fears of a blackout, the celebrations will be organized by ministers who will travel from Brasilia and welcome the president, as shown by Folha.

Bolsonaro must attend at least one event in person in each of Brazil’s regions, in addition to speaking via videoconference among others.

In an internal discussion of Planalto obtained by Folha, the Civil House’s SAM (Deputy Head of Articulation and Monitoring) considered that the government should be the target of “potential questions about the project’s classification as an election campaign”.

The portfolio associated with the ministry, led by Ciro Nogueira (PP-PI), denied electoral bias in the same document and stated that the “contract” was intended, in addition to promoting “accountability”, about major projects and public policies in progress. I have to inform. and transparency”.

Responding to the government’s fears, the Presidency’s SAJ (Deputy Head of Legal Affairs) issued an opinion on 16 September and said it was necessary to “exercise discretion and caution” in the events so as to “remove possible interpretations”. ” campaign status early election”.

The government’s legal department note cited statements in the STF’s (Supreme Federal Court) procedures regarding the distinction between electoral advertising and institutional advertising.

“Therefore, it is reiterated, in principle, that the scope described in these records is, in effect, no constraint of an electoral nature (the anticipated election campaign); however, discretion and caution should be exercised in such events.” It is still entirely reasonable to adhere to, in order to rule out possible interpretations that could lead to early election campaign conditions”, states the opinion of the SAJ.

In the face of the government’s worst rejection since taking office, Bolsonaro is planning a series of events to celebrate the week in which he completes a thousand days in office.

The programs will also serve as a platform for ministers looking forward to the 2022 elections.

The government will begin the 1,000-day celebration of the Bolsonaro administration this Monday (27) with a ceremony in Planalto and the launch of the Caixa Economica federal program.

The agenda runs from September 28 to October 1 in the states.

In other ceremonies, the President must speak by videoconferencing. In an internal discussion about the agenda, the Executive Secretary of the Civil House, Jonathan Asuncao, asks that events be “guided by norms and local, state and federal procedures regarding the COVID-19 pandemic”.

Bolsonaro promoted dozens of events with crowds during the pandemic. He was fined for failing to follow hygiene measures at celebrations in Maranho and So Paulo.

Bolsonaro’s departure was granted this Sunday (26) after the president received a negative result in a test for COVID-19. He was isolated at the Alvorada Palace since Wednesday (22), after the infection was confirmed by Minister Marcelo Quiroga (Health).

Quiroga accompanied Bolsonaro to New York to attend the United Nations General Assembly. The doctor remains in quarantine in the United States and will be replaced by the Minister of Mines and Energy, Bento Albuquerque, at the ceremony of the delivery of vaccines in Joo Pessoa.

The Minister of Agriculture, Tereza Cristina, also received a diagnosis from COVID and will be replaced at events in Amapá and Mato Grosso do Sul. The folder should be represented by the Executive Secretary, Marcos Montes.

According to documents obtained by Folha, the minister will make various deliveries at the ceremonies, such as a 10km duplicate road in Bahia and a contract for a fiber-optic submarine cable in Maranho.

Government officials say that some agenda is still open. A document dated 24 September stated that the delivery needed to be defined in the event in Brasilia, which took place on 1 October.

The same paper does not register a ceremony in Florianópolis on 1 October, which should be organized by the Minister of Economy, Paulo Guedes. In addition to celebrating the thousand days of Bolsonaro’s administration, the minister must sign a protocol of intent to allot Etero da Expressa Sul, an area of ​​the union, at the city hall of the capital of Santa Catarina.

With travel and events, Bolsonaro hopes to regain some of his popularity. According to Datafolha released last week, 53% of the population rated the president’s administration as bad or terrible, a new record.

During the visits, in addition to the ceremonies to commence the functions, the President must give interviews to local radio stations. The measure is part of a new communications strategy that seeks to provide efficiencies to government actions.

Along the chain of events, Planalto aims to attempt to set a positive agenda in the states, noting that the next year showed Bolsonaro at a disadvantage compared to his potential rival, former President Luiz Inácio Lula da Silva (PT). Is.

Before the pandemic, the government held events in Planalto every hundred days to see what to do during this period. This will be the first time Bolsonaro will travel for the purpose.

The distribution of tasks, the recovery of the economy and the launch of Oxilio Brasil, a program that reformed the Bolsa Familia, are the center’s leaders’ stakes trying to take advantage of the president’s popularity.