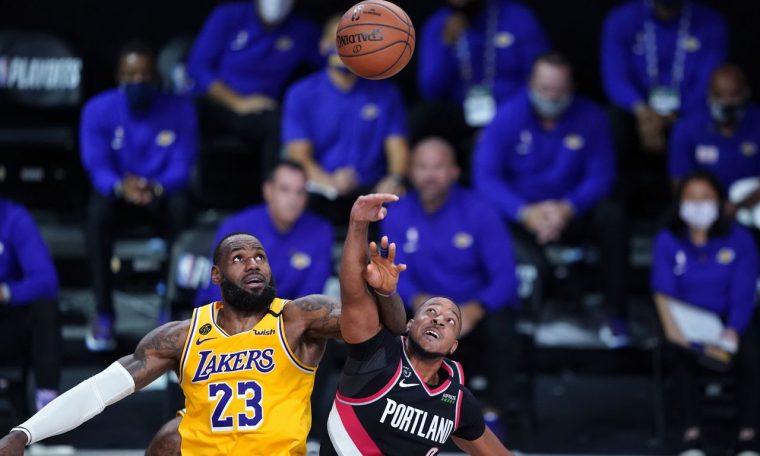 Lakers 56, Blazers 39, halftime: Not a strong first half for Portland. Los Angeles closes on a 12-2 run. Lillard has a team-high 14 points, but he’s 1 for 5 from three-point range and has committed three turnovers. Trent has eight points; McCollum and Nurkic have six each. Nurkic and Gabriel have three fouls apiece. For the Lakers, Davis has 21 points and eight rebounds. James has 10 points, four assists and three rebounds, but also four turnovers. McGee is Los Angeles’ only starter with two fouls.

Lakers 44, Blazers 33, 4:31 2nd quarter: Lakers have their largest lead. Simons is getting some minutes for Portland.

Lakers 16, Blazers 8, 6:59 1st quarter: Caldwell-Pope has six points for Los Angeles. James and McGee have four each. Gabriel has two fouls for Portland. Whiteside has entered the game.

Blazers 6, Lakers 6, 9:13 1st quarter: Lillard misses his first shot, makes his second. How many points will he score tonight? James picks up an early foul for Los Angeles.

Blazers 2, Lakers 2, 11:07 1st quarter: Portland wins the tip and McCollum scores the first basket of the game. McGee throws down a dunk on the other end.

The Portland Trail Blazers have a chance to go up 2-0 on the Los Angeles Lakers with a win tonight in Game 2 of their first-round playoff series. Doing so would guarantee that the Blazers will make history in one way or another at the conclusion of the series.

• You can watch Blazers vs. Lakers Game 2 live for FREE with fuboTV (free trial).

Winning the series in any fashion would make Portland only the sixth No. 8 seed to ever upset a No. 1 seed in the NBA playoff history.

Going up 2-0 and losing would mark the first time in franchise history that the Blazers lost a series after taking the first two games.

Portland is 13-0 in playoff series after going up 2-0. That’s dating back to the championship season of 1977 when the Blazers went up 2-0 in all three West playoff matchups before going down 2-0 to Philadelphia in the Finals, only to win the final four games to claim the title.

How to watch live stream online: You can watch the game live for FREE with FuboTV (free trial). You can also get this game on Hulu + Live (free trial) or Sling TV (free trial, promotional offers), if you prefer those platforms and their pricing plans.