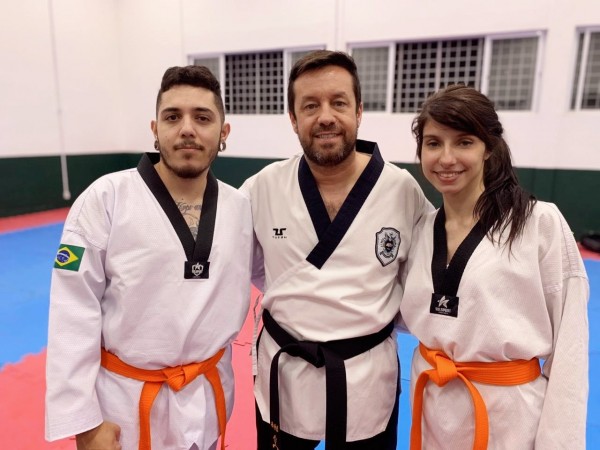 Integrate, socialize and incorporate to make good citizens, but often help develop high-performing athletes. The Quem Luta no Briga (QLNB) taekwondo project involving Uffpel and Pelotas City has already influenced hundreds of youth and gained national recognition. But the pandemic, as no different as it could be, forced a series of adjustments to ensure no participant’s health was at risk.

In this complex landscape, there were some who took advantage of being developed. This is the case of 21-year-old Lissie Diaz, who recently won the title in the championship held online. “Lice is one of the sponsors of the project. At first I envisioned his ability, with various gestures and great motor coordination. The pandemic brought virtual competitions, and he began to focus on it, always with success”, says Rossano Diniz, the main responsible master for QLNB.

The Copa Embixador de Poomsé and Copa Porto Alegre de Poomsé were the last tournaments that Lisi participated in. And she achieved excellent results, taking two first places. Harrogate Meyer Open Poomsey – not to mention the United Kingdom’s international achievement. A varsity tournament of an international character, which would theoretically take place individually, is going through a process of expansion, but it still depends on the progress of the pandemic for a concrete definition of the dates, venues and fighters.

“Now I am still training to compete in person in an event of the Brazilian Confederation and also for someone virtual that might get in the way, but is still unsure,” Lisi says. It is worth remembering that Poomse is a Taekwondo method that incorporates attack and defense movements within a single pattern of speed, aesthetics and strength. With no need for opponents, the virtual championship keeps happening.

Master Rossano, by the way, admires Lisi. “It is rare to find an athlete like him. Great autonomy, go ahead, research, ask about other masters’ methods. Today, Lisi is highly regarded among the national Taekwondo. ”, they say.

Last year 100% of online activities took place after the pandemic worsened, with a slight return to attendance for some athletes by November. Normal competitions only for Olympic level fighters follow, which is currently not the case on the QLNB. “Those who managed to train, they had positive results. But there were many casualties who could not continue training without a face-to-face space. Rossano points out that the home environment, internet, lack of equipment, etc., also play a role in other problems ranging from embarrassment to the show.

Some project participants who continue to prepare, even in complex situations, will be willing to retrain the face-to-face model as the health situation adapts. Meanwhile, the Master tries to reform himself.

“I am attending a training course for Brazilian Confederation of Taekwondo (CBTKD) coaches along with 220 other Brazilian coaches. Key team members are sharing ideas and scientific data in what we informally call Escola do Taekwondo Brasileiro. A unique moment for me, I’m learning a lot”, concludes Rossano, clarifying that QLNB still has a lot to collaborate on for the game at Pelotus.