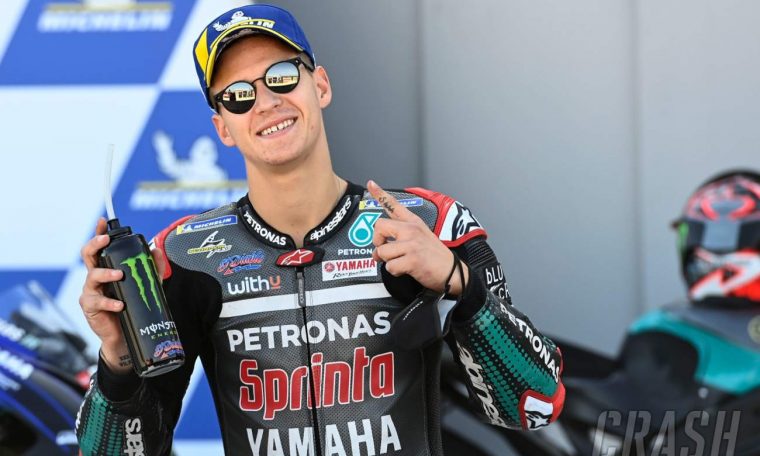 Fabio Quartaro has allayed any fears that he will feel uncomfortable at Yamaha after his massive boom during a free practice at Motorland Aragon, with 2020 Moto GP leaders bouncing back the pole for a tough fight for tomorrow’s race.

During a cool morning FP3 session, the Frenchman had a similar accident with FP1 while taking a break for Dr. Hill Navran 14. However, when he detached from the bicycle in FP1, this time he went to the top of the painful view, which affected the booking cycle and then the asphalt.

Taken to the medical center by stretcher, Quarterro was all set to get back on the bike before having a good time with the pole position – it was the fourth of his year and the tenth of his short career.

Although he was shown wandering heavily in and out of the box between races, Quartaro confirmed that when he was kicked by adrenaline for saying he rode a bicycle, he depended on it. How to ride.

“It was weird because we had the same crash in FP1, the front was lost so quickly at the break, then this morning I had a small stop so I lost the front in an instant. It was a strange accident and I felt pain in my leg, as well as in the morning cold I could not feel my fingers.

“I was a little scared because it was really painful at the moment, but it wasn’t that painful on the bike. I did a good FP4, 16 laps aren’t so bad but I didn’t expect to go so well in qualification, because I wasn’t feeling so happy all weekend getting a good lap.

“Yesterday was the right waist, which is nothing compared to today. When I’m on the bike it’s just outside-lap and inside where I feel bad, but when I do FP4, it was constant pain, but not really bad. It doesn’t hurt when I ride. As soon as you have the leather and the helmet turned on, you forget everything. Nothing bad, just painful when you’re off the bike. ”

Thinking of himself crashing into used tires, Quarto insisted he may have applied a small amount more to the brakes, but it was the cold conditions that could have caused the fall. , Which gave him relief from the actual race.

“I didn’t do anything wrong, it’s not like I took a break 20 minutes late, I did exactly that but maybe one more pressure. [on the brake] And I crashed it. Conditions were really difficult, you really need to be right and I wanted to push with used tires but we had this accident. ”