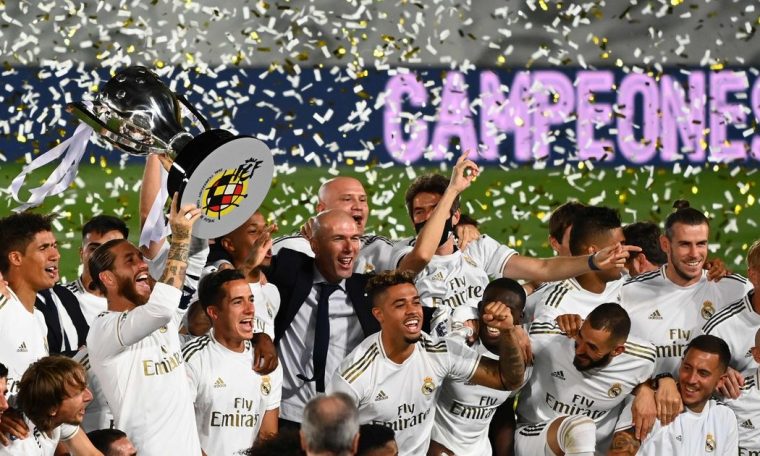 Real Madrid have been confirmed as Spanish champions for a record 34th time after a 2-1 win against Villarreal on Thursday evening.

Karim Benzema scored both goals, firing Real in front before the break before adding a second-half penalty, to wrestle La Liga back from Barcelona after two years.

Vicente Iborra pulled one back for the Yellow Submarine and Marco Asensio had a strike ruled out for handball deep into stoppage time.

It was their 10th successive victory at home to Villarreal as Zinedine Zidane guided the post-Galacticos generation to his second league title as manager in his third spell at the club, having come back to a struggling team following their Champions League exit against Ajax last March.

With only one round of matches left to play, Los Blancos went seven points clear at the top of the table ahead of Barca, whose form and finances have been ruined by the coronavirus.

Quique Setien’s side were beaten 2-1 by Osasuna at the Nou Camp, despite Lionel Messi’s second-half strike.

The celebrations were almost suitably restrained for a low-key season, during which Real Madrid have been criticised for a reliance on one-goal wins and set pieces.

While they have put together an enviable streak since the restart – winning all 10 league games and scoring 19 goals while keeping six clean sheets, conceding just four – Real had gone into the unplanned break in the campaign two points behind Barcelona.

The title was won without any fans present at the 6,000-seater Alfredo di Stefano stadium inside the club’s training complex, where they have been playing their behind closed doors home games in order to speed up the renovation work at the Santiago Bernabeu.

The usual trophy-lifting party, which traditionally centres on the Cibeles Fountain in Madrid, as well as the open-top bus parade through the streets of the Spanish capital, will have to wait, with the club and the mayor asking fans to stay away from the city centre.

But it was an extra special occasion for Welsh winger and one-time Spurs youngster Gareth Bale on his 31st birthday – though he missed out on the starting XI for a sixth straight game – and for club president Florentino Perez exactly 20 years since he began the job.

Skipper Sergio Ramos led the muted festivities on the pitch as he won his 22nd major career honour, nearly a decade to the day since he lifted the World Cup with Spain.

Bosses at Real’s club shop will be breathing a sigh of relief after they accidentally put champions merchandise on sale via their official website on Wednesday.

The squad can now set their sights on replicating their La Liga and Champions League double from 2017 – and there are no foregone conclusions for them either.

The newly crowned Spanish kings travel to the recently dethroned English champions Manchester City at the start of August but will have to overturn a 2-1 deficit in the last-16 tie.