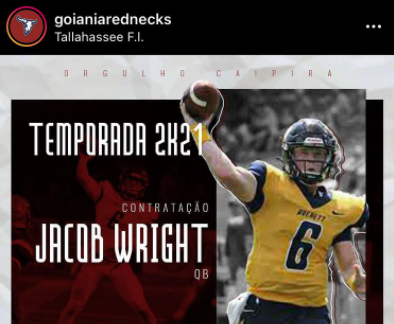 Goiânia Rednecks announced the appointments on Monday (25) Quarterback (QB) Jacob Wright, former Stuttgart Surge, who will arrive in November to reinforce the Cairo Santos Cup. However, the team conceded defeat. The player’s visit to the country would take place at no cost, but publication of his arrival silenced the comments and were then deleted.

Through a publication on Instagram, the team reported that the athlete left the European Football League (EFL) due to “unforeseen circumstances”. However, the general manager of Stuttgart Surge posted on the portal American Football International show that the QB was banned of the EFL for racist insults after loss to Frankfurt Galaxy 42 x 20.

“We took some time after Sunday’s game to calmly deal with this incident and talk to everyone involved. There is no place for any form of racism in the Stuttgart surge. Jacob Wright allowed himself to commit insults that will not be tolerated,” the note said.

Jacob will arrive in Brazil at the request of Brayden McCombs, which was announced by the country club in February. According to Haim Diggs, editor of the FABR Network portal, the Brazilian Confederation of American Football (CBFA) was asked to ban Wright from playing in the country. Its performance would be limited to Candango only, which was also vetoed.

Here’s what happened. In June, Stuttgart Surge (Jacob’s team) lost 42×20 to Frankfurt Galaxy. During the game, there was a chatter between the QB and an opposing LB, who was black. Jacob would have called the athlete a “black pussy” (do a google translate )…

Jacob’s announcement had a negative impact on American football teams and pages across the country and the Cerrado Football Federation (FeFAC).

At the time of this writing, both Rednecks and Brayden McComb have not commented on the matter.