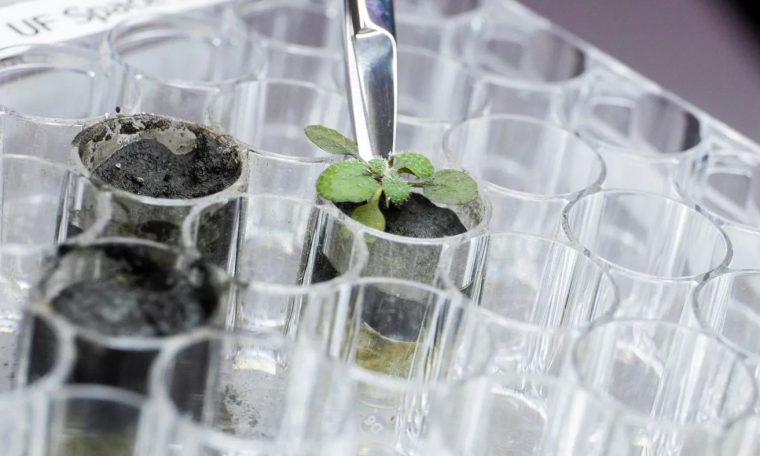 For the first time, scientists were able to grow plants on samples of lunar soil brought by Apollo 50 years ago. The work, led by the University of California, is an important step toward humanity being able to produce its own food in space, whether on the Moon or Mars.

The new study focused on assessing whether future astronauts who would live on the Moon would be able to grow vegetables in a greenhouse using a resource available on the lunar surface: regolith. Samples of this material were brought to Earth between the 1960s and 1970s by NASA’s Apollo Mission,

Although regolith This is a very unfriendly material. It is made up of small, dry and extremely fine particles of sand, containing minerals and ions not found on Earth. In addition, there is no organic matter in it, because, as far as is known, nothing has decomposed on our natural satellite.

For plants to grow in this material, the researchers needed to add some nutrients and water. It worked – at least in part. “After two days, we were surprised to see that all the seeds had germinated,” said astrobiologist Anna-Lisa Paul, lead author of the study.

The researchers were given a limited amount of regolith. Each sample contained about one gram of soil brought in by the Apollo 11, 12 and 17 missions. For the study’s controls, they planted the seeds in a simulated lunar soil. volcanic ash – The material known to scientists as JSC-1A.

Working with JSC-1A helped the team develop a diluted nutrient solution for growing seeds. They used trays with 48 holes and in three of them, they placed seeds with lunar regolith and a nutrient solution.

In the other four, they inoculated the seeds with a simulated regolith plus solution. The same setup was used on the three other trays to improve the experiment statistics. Then these dishes were moved to terrariums with ventilation and lighting.

Use of boxes a. was done to simulate the flow of air inside laboratory on the surface of the moon, The seeds in question are from Thele Agron (Arabidopsis thaliana) – are known for their rapid growth. Even when they germinated, they consumed the nutrients stored in the seeds, without the need for soil.

After a week, when the nutrient reserves were depleted, differences began to emerge. Compared to seedlings grown in simulated regolith, those grown in lunar material took longer to develop broad leaves, as well as smaller and somewhat deeply underdeveloped ones.

Then, the researchers demonstrated genetic testing on each plant to assess what metabolic tools they were using to adapt to the new soil. And they found that the seedlings were stressed: “They were working hard to stay healthy,” Paul said.

For the authors of the work, it is only a matter of time before we can grow plants on lunar soil. “We’re getting a lot smarter about how plants grow in very salty and drier environments here on Earth,” said study co-author Robert Ferrell.

NASA has already done something lunar regolith research, but nothing like the work of Paul and Ferl. Growing edible plants in space would reduce the burden of future manned missions to the Moon or beyond, as there would be no need to carry so much food. In addition, the appearance of vegetation has a positive effect. crew mental health,

For the past few years, plant cultivation has been a reality on the International Space Station (ISS). Crew members primarily assess the ability to grow some plants on mars Or board a spacecraft during long space trips to the planet.

The authors of the work have no doubt: space agriculture will be in the future; And research has just introduced a part of the Moon to biology. “To me, it is very symbolic. When we leave the earth, we will take the plants with us,” concluded Paul.

The research was published in the journal communication biology,