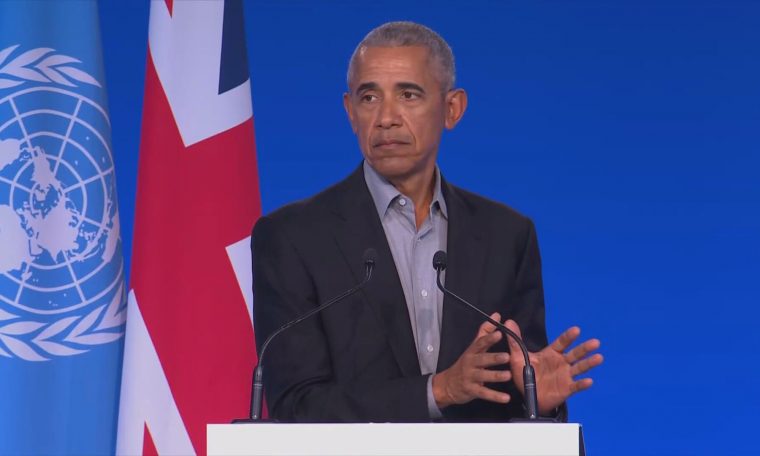 Former US President Barack Obama spoke at COP26, the 26th United Nations Conference on Climate Change in 2021, this Monday (8). According to him, curbing emissions and worrying about climate change “is not a partisan issue.”

“Saving the planet is not a partisan issue. Your party doesn’t care. Climate change around the world can be seen as an opportunity to gain political points. For those listening to me in the United States, it doesn’t matter whether you’re a Republican or a Democrat. If your house in Florida is flooded with ocean, then nature, physics and science don’t care about your party affiliation,” Obama said in the COP26 plenary.

Obama also directed a part of his speech to young people who fight for the climate. “We all need it, even if we disagree on other issues. And, what is also true around the world, the most important thing is energy. [na luta pelo clima] It’s coming from the young”.

Also according to Obama, the policy of his successor, former President Donald Trump, was “hostile” with the climate. Obama’s speech comes a week after President Joe Biden himself appeared at the convention, during which he explicitly apologized for Trump’s abandonment of the Paris climate accord.

“I recognize that we are living in a time when international cooperation has been curtailed in part because of the pandemic, due to rising nationalism and tribal impulses around the world, partly because of a lack of leadership on the part of the states. United for four years on several multilateral issues,” Obama said, acknowledging US failures under Trump in the region.

“Of course, back in the United States, part of our progress stalled when my successor in his first year made the unilateral decision to leave the Paris Agreement. I was not very happy about it,” he said. also reaffirmed what many world leaders and activists uncovered throughout COP26. “When it comes to the weather, time is running out,” he said.

Obama recalled commitments already made at the COP in Glasgow, such as reducing methane emissions by 30% and ending deforestation by 2030. He referred to the promises as “significant progress”, but “partial”.

With Biden, USA ‘engaged and ready for leadership role’

In an effort to help the Biden administration, Obama highlighted America’s withdrawal in the Paris Agreement following the election of Democrats, saying the country is “ready to take on a leadership role”.

“The government is engaged and ready (…) We take this very seriously. As the second largest emitter of polluting gases, we have to make this headway.

He then highlighted the approval of an infrastructure package by the Biden administration in the US Congress that he said would “create jobs and create an electric charging network so people can travel by electric cars.”

Obama also recalled the importance of another project that is in the US Congress: Build Back Better, a nearly US$3 trillion package that according to the former president would help reduce greenhouse gas emissions.

Obama tells youth, ‘You are right to be disappointed’

Directing his speech to young people, Obama said they are the main force in combating climate change for one “simple reason”: “They have more to lose than anyone else.”

See also  Why did Starr only play three shows outside the United States?

Referring to Swedish activist Greta Thunberg, Obama also said that there are “many Gretas” in many parts of the world. “You are right to be disappointed. People of my generation have not done enough to deal with the disaster you are facing today.

“For most of your life, you have been showered with warnings about what the future will be like if we don’t address the climate crisis,” Obama said. “And you grew up watching so many adults who are in a position to do something about it, acting as if the problem doesn’t exist or refusing to make the difficult decisions necessary to solve it.”

In the COP26 plenary, Obama criticized the absence of key leaders such as Xi Jinping (China) and Vladimir Putin (Russia), whose nations have contributed to the climate crisis. “I must admit that it is sad to see that China and Russia did not participate in this meeting. Their national plans seem to want to maintain the status quo, it is sad.”

“We need economies like Europe and the United States to be the leaders in this discussion. We need Indonesia, South Africa, Brazil to leave no one in Russia. I agree that this is the moment when international cooperation is less. But something goes beyond political issues – climate change”, he said.

*With information from Edward-Isaac Dovre and Paul LeBlanc CNN