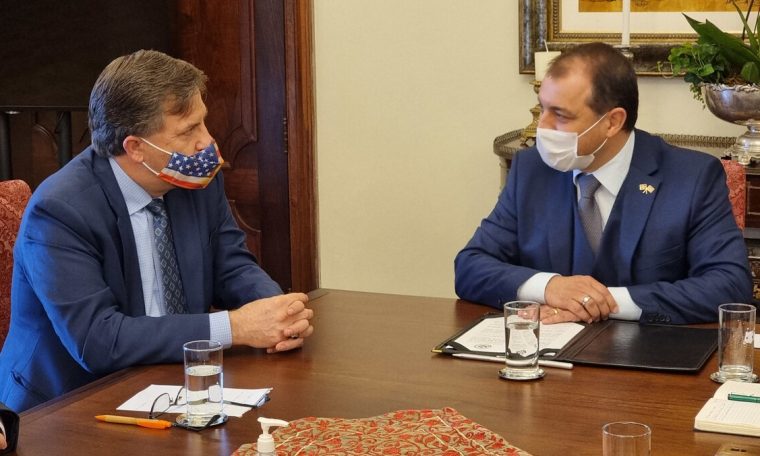 The Government of the State of Santa Catarina last Monday afternoon (28) signed a Memorandum of Understanding with US Embassy in Brazil.

The contract was signed by Governor Carlos Moises and provides for partnerships in the areas of trade and investment; health, science and technology; atmosphere; Agriculture; Education and Human Rights.

It took a year to sign the agreement. During that time, the embassy and the government of Santa Catarina defined common areas and projects that could be done together. The idea is to solve administrative and public safety problems, define goals, parameters, outcomes, and improve the practice of information exchange between countries.

According to Daniela Abreu, Executive Secretary for International Affairs (SAI), apart from the exchange of knowledge and innovation, the partnership can encourage the establishment of new companies in the state.

Investing in Santa Catarina companies can also happen through the Expression of InvestSC – Government Program Event To attract investment and encouragement for new businesses in Santa Catarina.

The agreement is expected to last until December 31, 2022, and may be extended. During this period, the involved portfolio will conduct technical studies on each topic and if there is mutual understanding, specific cooperation agreements will be signed for each project.

The United States and Santa Catarina must commit to promoting expert exchanges and technical visits.

Signed by the Secretary of State for Finance, Paulo Alli, Economic and Sustainable Development, Luciano Bulligan, Integrity and Governance, Naira Augusto, Infrastructure and Mobility, Thiago Vieira, Agriculture, Fisheries and Rural Development Deputy, Ricardo Miotto Ternas, Casa Militar The premier, André Alves, and the head of the office of governor, Marcio Ferreira, as well as Consul General Shane Christensen and other representatives of the delegation.

After signing the document, to discuss areas of cooperation and technological development at the Santa Catarina Technology Association (AKT) with Secretary Daniela Abreu, Ambassador Todd Chapman, Consul Shane Christensen and delegation; and in Sapiens Parke on Technology and Innovation and Environmental Technology with President Danielle Leipnitz.

This is the second Protocol of Intentions signed by Governor Carlos Moises. The first, in 2020, was with Germany. Currently, Santa Catarina is working with the German country to reopen the Chamber of Commerce in the state.