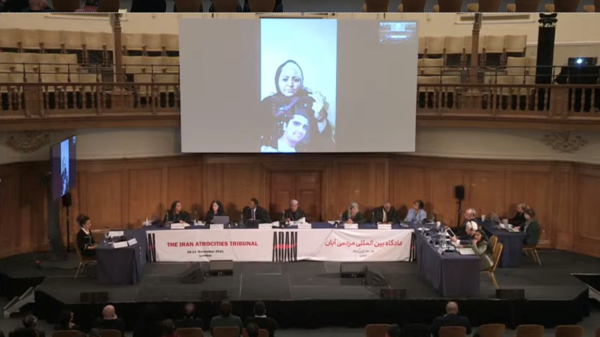 the fourth day has begun of the International People’s Court Which is being held in London to consider the case of the massacre of Iranian protesters in November 2019, where witnesses told horrifying stories of what happened at that time.

At the start of the trial, which took place on Saturday, Robert Heinz, professor of international humanitarian law at Leiden University, presented a report on his investigation into what happened, noting that “crimes against humanity” were committed in those protests.

Haynes said the investigation revealed that “the Iranian National Security Council issued a general order to provincial security councils to shoot directly at demonstrators, and it was a general order without mentioning specific locations and issues.” According to the website “Iran International”.

In addition, an investigation by Leiden University stated that nine high-ranking officials played a role in the killing of the protesters, indicating that they should be held accountable.

For his part, one of the witnesses, Sohail Abdi, confirmed that he left Iran after posting a video of his shooting on the Internet, pointing out that his father was arrested and tortured by security forces.

He said that fearing arrest, he went to a private doctor after being shot, and underwent surgery at home, and about 40 injured called the same doctor.

Khamenei and Raisi are among those accused

Abdi quoted hospital staff as saying that security forces were transporting the dead in meat trucks to the city of Kahrizhik.

It may be mentioned that the court started its daily session in London from last Wednesday and will continue till tomorrow, Sunday.

The court aims to “investigate the killing and torture of people in the November 2019 protests” and to examine the statements of 45 witnesses against more than 130 officials of the Iranian regime, including Supreme Leader Ali Khamenei and President Ibrahim Raisi.