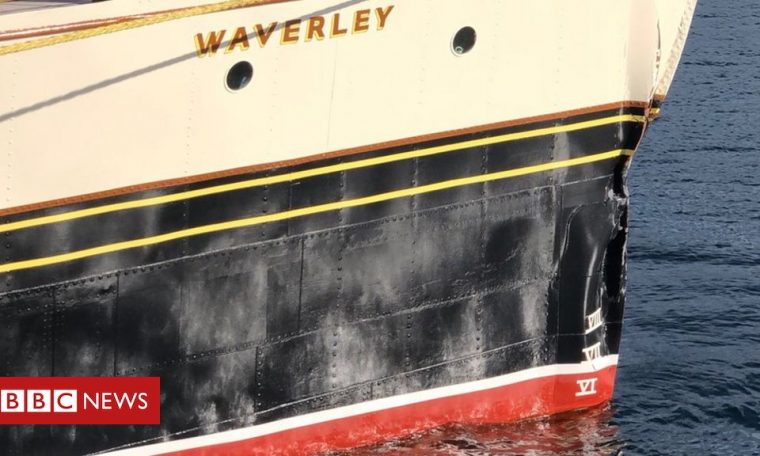 A total of 17 people were injured when a scale steamer collided with a Brodick pier in the Warner Aran.

The Maritime and Coast Guard Agency (MCA) said “many have been taken to hospital” following the incident.

Those stranded in Aran were later to return to mainland by an emergency cruise ship, the Calmac Ferry.

Police, paramedics, coastguards and rescue helicopters rushed to the scene after the alarm went off at about 7:15 p.m. Given.

The MCA said it was believed the plane was carrying 213 passengers and 26 crew when it was injured.

A Graham McVilliams passenger told BBC Scotland Nine About the moment of collision.

He said: “As soon as we got around, everything seemed normal.

“Then there was a sudden crash, a loud noise, and the boat stopped very fast. I saw people falling and it was very sad.”

He added: “There was a lady Rat I saw who literally went through the window.”

Mr McWilliams said that, hours after the accident, passengers were still meeting about the boat’s terminal at Brodick.

He said it was unclear whether they would be able to leave the island or find accommodation.

Transport Secretary Michael Matheson later tweeted Arrangements were made for Calmack to operate an emergency ship To take Waverley passengers back to mainland.

Rita McLeod, who was waiting to board Waverley, said she saw people being taken to ambulances.

“We were actually waiting in line to get in when the crash happened,” he said. “It came in command first. It came very fast.”

“We saw a lot of people falling, some people fell. People were taken in ambulances.

“We saw a lot of people, very badly shaken, coming.”

The plane was scheduled to depart Greenwich in the morning and depart for Brodick at about 17.00.

Another eyewitness saw the crash from the departure terminal as she waited to board.

Anne Cochrane from Bishopbridge, near Glasgow, said: “The plane collided as it was returning from Holy Isle. We were just stuck in the departure terminal. We had no information.”

The incident has been reported to the Marine Accident Investigation Branch.

Waverley Two weeks ago traveled for the first time in two years, An event that was delayed due to an “unexpected technical and administrative issue” in itself.

A funding appeal was launched in June 2019 and hit its target in December after receiving a ਮਿਲੀ 1 million grant from the Scottish Government to assist in the rehabilitation.

This paddle steamer, built by A&J Inglis of Glasgow and first launched in October 1946, has been involved in previous accidents.

It was badly damaged in July 1977 when it struck rocks near Dunun.

In 2017, it was involved in another event When it collided with Rothese’s pit.