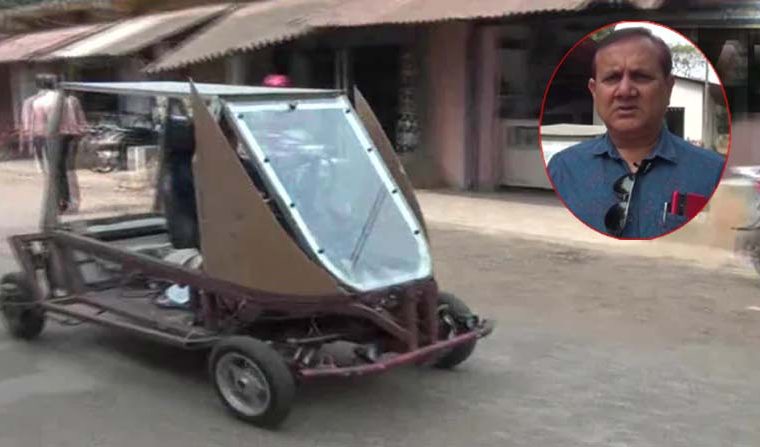 Solar powered car: Some people are looking at their talent with their talent. A farmer from Odisha makes his solar car and entertains everyone …

Solar powered car: Some people are looking at their talent with their talent. A farmer from Odisha makes his solar car and entertains everyone. He says that it can last up to 300 km once charged. Sushil Aggarwal of Karanjia in Mayurbhanj started building solar cars at his house during the lockout. He owns everything including electrical fittings, motor windings and frames. However, the farmer completed it three months ago on the advice of a friend with the help of two mechanics. However the planks still need to be tightened. Sushil Aggarwal said that it will take eight and a half hours for the solar car battery to be fully charged. He claims that the battery, which charges slowly, will last for ten years. He said that once the car is charged, it can travel up to 300 km.

He said that petrol prices were skyrocketing after the lockdown and he wanted to know what kind of electric vehicles to build and his own solar powered car through YouTube. He wants the government and government agencies to encourage such things and allow them to run on the road.

Thoughts through a workshop on the invention of new ideas

Meanwhile, a workshop was organized on new idea invention in his field. Sushil present in the meeting started the construction of the vehicle with the help of the mechanics introduced there. They assembled one 850 watt motor as well as a 54 volt battery and other devices one by one. In the process, he read his books and watched a YouTube video to learn more about vehicle parts. Solar worked for a total of 8 months to build the car and ultimately designed the vehicle. However, it is notable that the battery is charged with solar energy.

However, he said that he anticipated the possibility of future increases in petrol and diesel prices during the lockdown period and was therefore ready to build his vehicle. Locals are praising the vehicle, which is charged by solar panels on the top of the vehicle.

read these: Round Maps: Another new feature in Google Maps is that you can now edit maps.

Visa Free Entry: Bumper offer for Indians .. Can there be a return to 16 countries without a visa .. Do you know how?