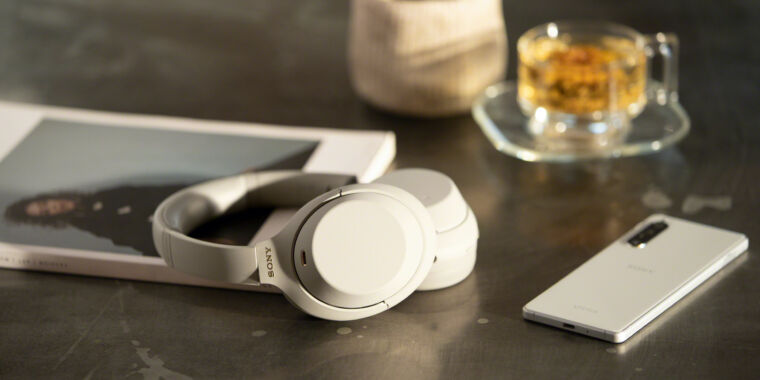 The XM4 is available for pre-order starting today, with shipping to start sometime in “mid-August,” according to Sony. The headphones cost $350, which is the same price as the XM3 at launch and Bose’s competing QuietComfort 35 II, but $50 less than Bose’s Noise Cancelling Headphones 700.

I’ve had the XM4 on hand for the past couple of days; I plan to have a more detailed comparison in the near future, but for now I can share some initial impressions alongside today’s news.

In general, the idea behind the XM4 is one of refinement more than radical reinvention. The design is nearly identical to its predecessor: we’re still looking at a largely handsome design with a plastic yet sturdy and smooth finish, which is available in black or silver with copper accents. The earcups still fold up for easy storage, there’s still a USB-C port for charging, and the device can still work over an included 3.5mm cable in a pinch. There’s still a set of touch-based controls on the right earcup instead of physical playback buttons.

Sony says it has made some slight design tweaks to accommodate more head and ear sizes, though: the headband is slightly less padded but also a tinge wider, while the earpads are said to have a 10-percent larger surface area. Comfort was not a general area of concern with the XM3, and so far I’ve had no major complaints wearing the XM4 for extended periods. They still aren’t as light as something like Bose’s QuietComfort 35 II, but there’s enough cushioning and space here to feel agreeable for hours at a time. At the same time, they still provide a just-firm-enough seal to keep too much outside noise from seeping in.

Though the active noise cancellation (ANC) on the XM3 was close to best in class, Sony says it has improved upon the tech with the XM4. The company claims that the headphones use a new Bluetooth audio SoC—it didn’t specify which—and an updated algorithm for its own QN1 noise-cancelling chip to update and process noise cancelling in real time. According to Sony, this should make the XM4 slightly better at muting out low-end frequencies such as in airplane cabins or on rumbling trains but also provide more noticeable gains in mid- and higher-end frequencies, where most human voices and everyday noise reside.

I haven’t been able to truly stress test this claim yet—a global pandemic isn’t the most accommodating setting for such matters—but I can say that the ANC quality here is still deeply impressive, almost totally wiping out the droning of a busy air conditioner even without any music playing. If nothing else, it doesn’t appear to be a downgrade from before. No noise-cancelling headphone can truly mute everything, and that won’t change here, but any progress toward negating those higher-end noises would be a good thing.

Beyond that, the XM4 still features an “ambient sound” mode that does a reasonably good job of blending in outside noise without overwhelming your music completely, just in case you want to be better aware of your surroundings. Its strength is still adjustable on a 20-point scale found within Sony’s companion app, and the mode can still be activated through a button on the headphones themselves. On the XM3, that button simply swapped between ANC, ambient sound, and a standard audio mode. Here, it has been replaced with a “Custom” button that can also be set to activate either the Google Assistant or Alexa voice assistant, both of which have built-in support. There’s still no option to manually adjust the strength of the ANC, though, which is a key feature offered by Bose’s Noise Cancelling Headphones 700.

Perhaps the most useful new feature I’ve used thus far is something Sony calls “Speak to Chat.” After setting it up in Sony’s companion app, the feature lets the XM4 automatically pause your music and amp up the ambient sound setting once it detects your voice. This is highly convenient for those brief conversations that come up when you’re in the middle of something—instead of having to take the headphones off or fumbling with any pause buttons, you can simply speak when you need to, then either double-tap the right earcup or wait 15 seconds to start back up whatever you were listening to. The feature can be turned on and off at any time through the companion app or by holding your hand over the earcup for several seconds.

That comes in addition to “Quick Attention” mode found on the XM3, which lets you hold your hand over that earcup to momentarily lower the volume and let in ambient noise for things like flight attendant announcements.

Sony has also introduced a new “Adaptive Sound Control” feature that leans more heavily into location tracking and “smart headphone” functionality. This is another setting controlled in Sony’s companion app. Essentially, it lets you program different audio settings—ambient sound strength, EQ settings, ANC and Speak to Chat activation—based on your activity level and current location, the latter being new to the XM4. You could set the headphones to automatically mute everything once it recognizes you’re sitting down, for instance, or have it ramp up the ambient sound and turn on Speak to Chat when you’re near a Starbucks and want to pick up a coffee without pausing your music. You can manually mark locations for different pre-sets within the app, and Sony says the headphones will automatically recognize frequently visited locations over time. Thankfully, all of this is completely optional for those who don’t want their headphones constantly tracking their location. But it’s there for those who want a more hands-free experience with headphones designed for travel.

Sony isn’t advertising massive changes to audio quality with the XM4. The main touted feature is an updated version of the DSEE HX audio upscaling software found on the XM3; here, the tech is called “DSEE Extreme,” and Sony says it will be more accurate at “restoring” audio data lost in compressed digital files in real time. The headphones also support Sony’s burgeoning “360 Reality Audio” spatial audio tech—which essentially makes audio sound like it’s coming from all around you, as in a simulated speaker system—though only a few streaming services like Tidal and Deezer support the feature, and the library of tracks that have been mixed in the format is relatively small.

Based on my early listening, the XM4 still has a moderately bass-forward sound, with a punchy low end that can sometimes outshine details in the treble. It’s not a world-beater in terms of imaging and detail—the ANC is still the main selling point here—but it’s definitely good, it rarely sounds harsh, and it should particularly appeal to those who like a little extra bass. If you don’t like the default tuning, though, you can still swap through a few different EQ pre-sets or customize the sound yourself with the moderately powerful EQ tool in Sony’s companion app. That’s great.

One enthusiast tidbit to note is that Sony has dropped support for Qualcomm’s aptX and aptX HD Bluetooth audio codecs. Instead, the XM4 only supports SBC, AAC, and Sony’s own LDAC. For most users, including all iPhone owners, this won’t make much of a difference: Apple has never supported aptX on iOS devices, and the difference in audio quality between aptX and the base SBC codec isn’t perceptible to most. But aptX HD’s improvements can be a little more noticeable with a pair of high-end headphones like this, and while LDAC has a higher audio quality ceiling, it requires more bandwidth to get there, which can result in a finicky connection when you’re on the move. LDAC has its benefits in a stable environment, though, and it’s available on many Android phones these days. It’s not available on iOS devices, however.

Sony rates the XM4’s battery life at 30 hours with ANC activated and up to 38 hours without, which is the same as the XM3. What you actually get will depend on how loudly you play things, but you should get enough for a few days of listening either way. The company says a 10-minute charge should result in roughly five hours of playback time. The device has five built-in microphones, and Sony is touting improved call quality, which is an area where Bose currently holds a distinct advantage.

The whole thing connects over Bluetooth 5; so far I’ve had no issues with connection hiccups, and the headphones have automatically reconnected to my Google Pixel 3a each time after the initial pairing process. Notably, the XM4 will have the ability to connect to two devices over Bluetooth simultaneously. Sony hasn’t fully set this feature live yet, so I haven’t been able to test its specifics, but the company says it will work through the aforementioned companion app and become available through a firmware update around the device’s launch.

Also new is a “wearing detection” feature—much like other headphones such as Apple’s AirPods, the XM4 have a built-in motion sensor that can automatically detect when the headphones have been put on and taken off, pausing and playing music accordingly.

I’ll have to spend more time with the XM4 before making any definitive judgments, but generally speaking, Sony seemingly hasn’t changed the core of what made the XM3 such a laudable device: strong ANC and good sound in a comfortable design. Not all of the newer “smart” features are enticing, but things like Speak to Chat, multi-device connectivity, and motion detection have immediate benefits. While you’ll have to spend a good chunk of time in the companion app to get the most out of them, the XM4 look as if they’ll be a contender for those in the market for a premium pair of wireless noise-cancelling headphones.