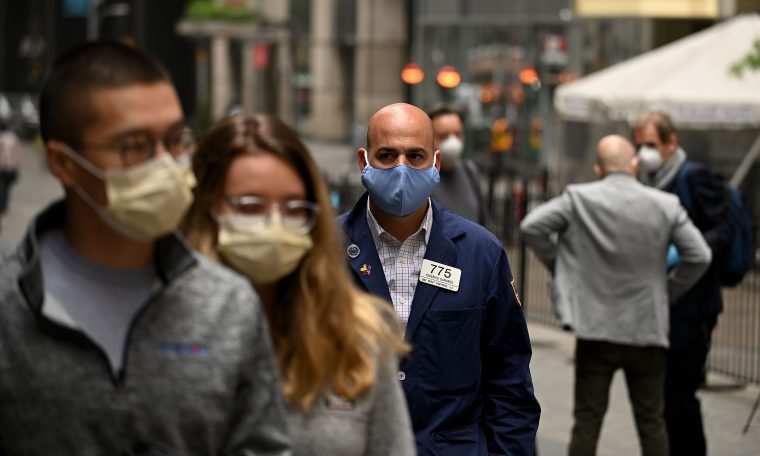 Stock futures opened flat Wednesday evening, with the three major indices looking to pause after a strong rally earlier in the day.

During the regular session, the S&P 500 briefly topped its record closing level of 3,386.15 from Feb. 19 before ending just slightly below that level. The information technology, health-care and consumer discretionary sectors led the blue-chip index’s 1.4% advance on the day.

An improving outlook on the Covid-19 case front in the US, along with better-than-feared earnings results among major corporations, have given stocks runway to continue their march higher, even as uncertainty over the economic and political outlook lingers, some analysts said. Virus-related hospitalizations in Texas fell to the lowest level since early July on Wednesday, and hospitalizations in California also extended a downward trend, with Governor Gavin Newsom suggesting that the state was “turning the corner” on the pandemic.

“There’s some visibility to the end of the bigger shutdowns, you’ve seen some improvement in the case loads across the Sun Belt as well,” Ed Clissold, Ned David Research Group chief US strategist, told Yahoo Finance’s The First Trade earlier in the day.

“But also, we’re most of the way through the earnings season, and the beat rate — that is, the percentage of companies that have beaten estimates — is actually on pace to be a record high of 84%. So that’s some good news for the market to trade on,” Clissold added.

After market close Wednesday, Lyft (LYFT) reported a narrower than expected second-quarter loss, and its 61% decline in second-quarter revenue was a shallower drop than feared, as the pandemic wiped out demand for ride-hailing. The company said ridership was up 78% in July compared with April’s lows, and the company maintained its outlook to hit adjusted EBITDA profitability by the end of next year.

See also  Brazil beef exports with China, US and Egypt up 30% by April - poca Negócios

Investors also continued to hold onto hopes that lawmakers would eventually reconcile their disparate demands and pass another coronavirus relief package.

However, prospects of a near-term deal appeared slim as of Wednesday as policymakers continued to verbally spar rather than return to the negotiating table. Treasury Secretary Steven Mnuchin suggested in an interview with Fox Business that the White House would not budge on its stance of moving ahead with Senate Republicans’ $1 trillion proposal, despite Democratic lawmakers’ calls for at least twice as much in aid. Senate Democratic Leader Chuck Schumer and House Speaker Nancy Pelosi said in a joint statement in response to Mnuchin’s remarks that they had “made clear” that they were “willing to come down $1 trillion if they will come up $1 trillion.”

Meanwhile, on Thursday, the Labor Department’s report on weekly unemployment insurance claims is set to reflect the ongoing economic damage from the coronavirus pandemic. Another 1.1 million Americans are anticipated to have filed new jobless claims last week, for a twenty-first straight week that claims topped 1 million during the pandemic.

For tutorials and information on investing and trading stocks, check out Cashay