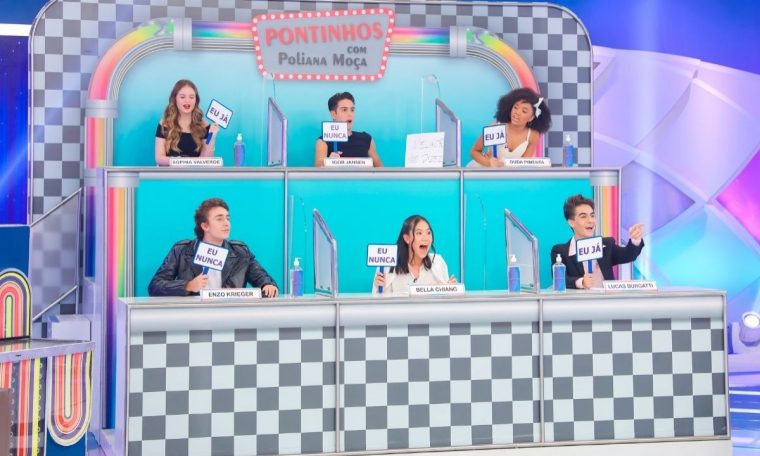 Next Sunday (20), the artist of Poliana Moca, Silvio Santos will be on the stage of the event to participate in Jogo dos Pontinhos. Face to face with Patricia Abravanel, Bella Chiang (Song Park), Duda Pimenta (Kesya), Enzo Krieger (Luigi), Igor Jensen (Joao), Lucas Burgatti (Eric) and Sofia Valverde (Polyana) Some people will be surprised and reveal what they know about their lives by playing “I Never”.

Throughout the allure, which aired on the eve of the soap opera’s premiere, they would still show off their skills in a talent competition, where they would have to dub and dance songs from the classic film Grease. In the end, Silvio Santos’ daughter and the audience will choose the best pair.

Polyana Moka will premiere next Monday (21) at 8:30 PM on SBT Screens. The date chosen by the broadcaster is objective, as it will air a week before Pantanal, Globo’s 9 pm soap opera, which will premiere on March 28. SBT’s fight against Globo is for press impact and social network engagement. Will have to see how far the contest goes.

On Tuesday (15) SBT promoted the press conference of Poliana Moca, the station’s new telenovela, which follows the channel’s last unpublished plot, Aventuras de Poliana. Part of the cast was present at the event held in So Paulo, where the team introduced Feud’s novelty and focused on the presentation of a key character for the production: O Pinocchio (Joo Pedro Delfino).

Journalists present at the event were able to visit some of the soap opera’s scenarios, in addition to interviewing the cast of the plot. Serial heroine Sofia Valverde reveals how it was to return to the studio after 2 years with recordings suspended due to the COVID-19 pandemic.

“It was difficult for everyone, there were people who took it well and others who didn’t. I had to play content games several times and I learned a lot from Pollyana, but it was very difficult for me. Tastes a lot of pain lets say, it hurt a lot of people […] Then I grew up, matured, I lived my teenage years in a pandemic, indoors, so I put a lot of Sophia’s stuff in Pollyana.”

Written by Iris Abravanel and directed by Fernando Pelagio, SBT promises to make Poliana Moca one of the best youth soap operas the network has ever produced. The wife of Silvio Santos, who attended the press conference away from her home in the United States, said that SBT is preparing another soap opera, while Poliana Moca is on air.

“I already thought yes, but we have a lot of projects, maybe one day we can do it and have more time. Now we have two soap operas – we are preparing for the second one together. There will be shoots, and films. We have a lot of activities for a while, but I feel like,” he said.