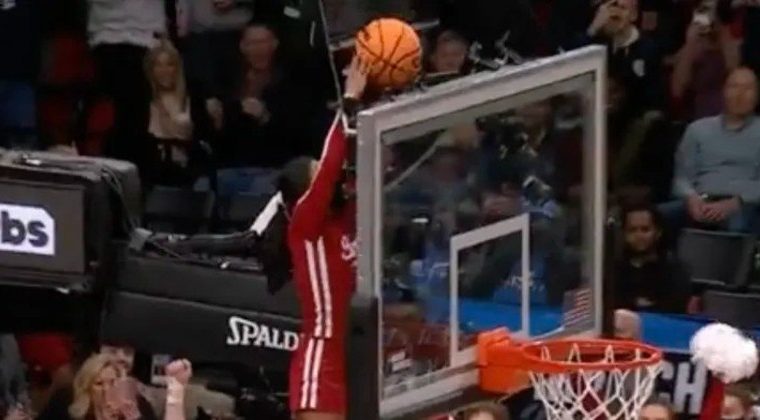 How many basketball players does it take to get a ball stuck in the back of the backboard? The answer may surprise you, as did cheerleaders Nathan Paris and Cassidy Cerny Thursday night at the Indiana-St. Valid for the National University League of Mary, USA.

At the start of the third quarter, play went on as normal until the ball being used got stuck in a spot that was apparently difficult to reach. For a few minutes, the athletes on the court and the match referee analyzed the situation and made unsuccessful attempts to fix the ball. Not even Mathias Tass, a 2m player for St. Louis. Mary, got it.

Until the cheerleaders swung into action. Nathan lifted his colleague Cassidy on his shoulders, as he often does in his performances, and lifted it with his hands for Cassidy to finally reach the ball, much to the delight of the narrator and everyone in the stadium. Who applauded loudly. effort made by girl students

“It was too high to reach up off the floor and the referees didn’t want anyone to take a chance on the chair, so I grabbed Cass and we were like, ‘Okay, I’ll push you and we’ll see if it works, Nathan said. Paris at the end of the game. “We train this move every week, it was very easy,” he said.

Despite this feat by the Indiana Cheerleaders, the team lost the clash. St. Mary won 83-52.