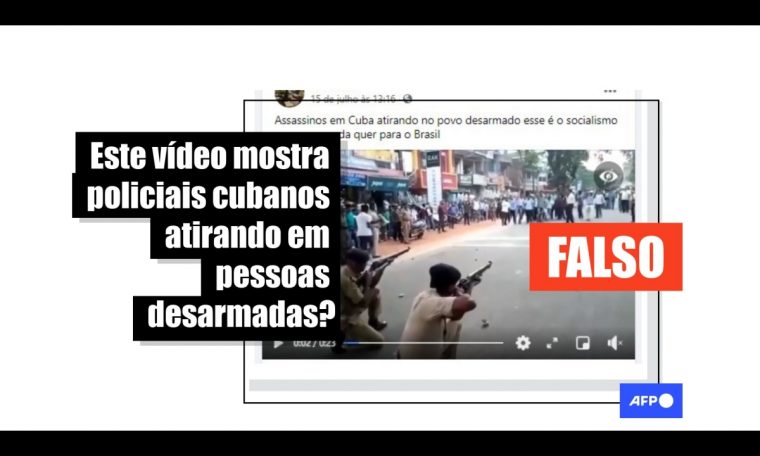 A video of police officers allegedly shooting at unarmed people has been shared hundreds of times on social networks since July 15, 2021, alleging it was recorded in Cuba. However, the statement is false. In fact, the footage shows a fake police exercise in the Indian state of Jharkhand in 2017.

“Killers in Cuba shoot at unarmed people, this is the socialism the left wants for Brazil”, says one of the subtitles posted on Facebook (1, 2)

“Understand and respond to the connection between this scene in Cuba and the secret counting of votes … it is not enough to say that you understand”, said a user Twitter Amidst discussions about the adoption of the printed vote in Brazil.

President Jair Bolsonaro Confirmation In front of the Alvorada Palace on 13 July 2021 “Here in Brazil, in order not to correspond to Cuba, the vote must be printed and audible. And also the public’s vote count”. Similar claims have since been echoed by its supporters on social media. the president and his followers have pressure on congress For the implementation of the printed ballot in addition to the currently used electronic ballot.

Posts were shared after Outbreak of protests in Cuba On July 11, 2021, under the cry of “Down with the dictatorship!”, “Let them out!” I “Homeland and Life!”. Demonstrations against the government were triggered by the impending economic and health crisis on the island. President Miguel Diaz-Canel called on supporters to take to the streets in response to the acts.

However, the video was also published in March 2020 Indonesian In publications claiming Indian police fired on Muslims. information Verified by AFP in season.

But the messages going viral were fake. The footage had already circulated on the internet in 2017 and is a police exercise. peg, a city in the state of Jharkhand, India.

At the end of filming, you can hear a policeman speaking in Hindi that he was “Just a demonstration that Khunti police is ready to take action against any untoward situation.”

In addition, there was a two-minute, 35-second video of the same incident shot from a different angle. not posted on youtube On November 3, 2017 with the title: “Khunti Jharkhand Police (Part of Training) Rehearsal”.

The video caption says: “In rehearsal for the police peg. How we police officers handle and control crowds in cities and elsewhere. (This is just a rehearsal)”.

Anand Dutta, a freelance journalist working in the Indian city, told AFP in 2020 that the exercise was conducted near the main square of Khunti at the same time as the ceremony. festival hindu di diwali in 2017.

“The location shown in the video is near the main square of Khunti City”, said.

Dutta also sent pictures via WhatsApp of the street where the training took place. Below is a collage of photos sent by the journalist (left) and screenshots from the video reproduced in a misleading post by Facebook users (right), highlighting similar elements: 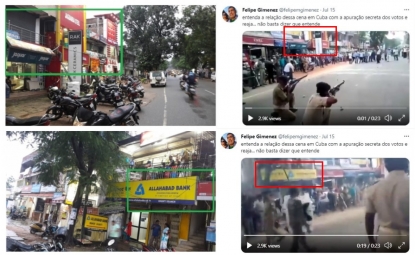 A red section of the Jagdamba Steel store, which can be seen within four seconds of the misleading video, can also be seen in an image uploaded by a Google user and Marked in place on Google Maps.