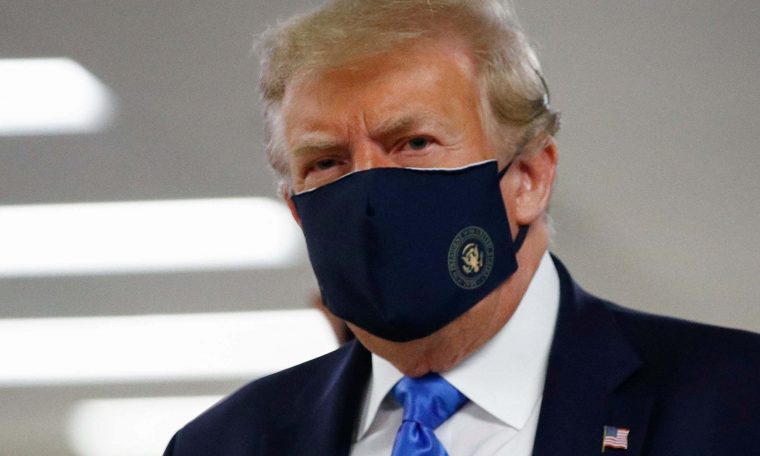 As the number of coronavirus infections in the US surges for the third day in a row to more than 69,000 cases, President Donald Trump has appeared for the first time in public wearing a face mask, at a medical facility outside Washington.

Mr Trump has eschewed the wearing of face coverings in public, previously saying he “didn’t want the press to get the pleasure of seeing it”. But with Covid-19 infections and deaths rising across the country, the president made an abrupt U-turn earlier this month and claimed he is “all for masks”.

On Saturday, Mr Trump appeared to express confidence in rapper Kanye West, who recently announced plans to run for the White House and distanced himself from the president.

Retweeting an article in which one of his own campaign advisers mused that Mr West may be trying to take black votes away from Democrat candidate Joe Biden, Mr Trump added: “That shouldn’t be hard. Corrupt Joe has done nothing good for Black people!” He added nothing further to the theory.


‘Nobody ever heard’ Abraham Lincoln was a Republican until Trump came along, president claims

Donald Trump claimed that “nobody ever heard” Abraham Lincoln was a Republican until he became US president, during a roundtable discussion on Venezuela.

Speaking at his Doral golf resort in Florida, the president mostly ignored the issue of Venezuela and instead praised his administration’s handling of the coronavirus pandemic, which has seen a death toll over over 135,000 in the US alone.

“Like people don’t remember, nobody ever heard of it until I came along, nobody remembered it for a long time, or they didn’t use it at least, I use it all the time: Abraham Lincoln was a Republican.

“You know you say that and people say, ‘I didn’t know that’, but he was a Republican, so we’re doing a great job.”

The president demanded the extradition of Christopher Steele, the British former M16 officer who compiled the infamous dossier on the president’s ties with Russia.

Donald Trump tweeted on Saturday morning: “This man should be extradited, tried, and thrown in jail. A sick lier [sic] who was paid by Crooked Hillary & the DNC!”

He later tweeted: “Bring back Steele!!!”, and retweeted a link to a book on the Russia investigation by Gregg Jarrett, a legal and political analyst with Fox News.

Read the full report by Oliver O’Connell below:

An op-ed in the Washington Post marked Mr Mueller’s first public statement on his investigation since his congressional appearance last July.

It comes after the president’s extraordinary decision to commute Stone’s prison sentence on Friday, just days before the latter was due to report to prison.

Mr Mueller wrote: “The Russia investigation was of paramount importance. Stone was prosecuted and convicted because he committed federal crimes. He remains a convicted felon, and rightly so.”

The former FBI director has been exceedingly tight-lipped during the investigation and has refused to explain or justify his work – until this op-ed. Mr Mueller recounted how Stone tampered with a witness and lied repeatedly about his efforts to gain inside information about Democratic emails that Russian operatives stole and provided to WikiLeaks.

David Harris Jr, an advisor on the president’s campaign’s Black Voices for Trump advisory board, told Washington-based news site Just The News that Mr West’s political strategy may be to “get some black votes that would have voted for Biden to actually vote for Kanye”.

Mr West announced his plans to run for president earlier this month, but it may be too late for him to get on the ballot. Last week, the music icon distanced himself from supporting Mr Trump and said his presidency “looks like one big mess to me”.

Despite Mr West appearing to hold the president at arm’s length, Mr Trump retweeted the interview with Mr Harris and added: “That shouldn’t be hard. Corrupt Joe has done nothing for Black people!”

President Donald Trump was seen for the first time wearing a face mask in public during a visit to a military hospital, after months of ignoring advice to do so.
See also  Matilda | Netflix Musical suspends production following coronavirus outbreak

During the visit, he met with wounded service members and healthcare providers caring for Covid-19 patients.

Good morning, and welcome to The Independent’s liveblog on US President Donald Trump.