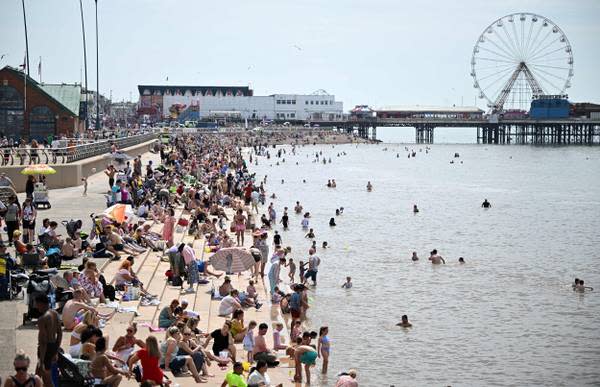 Europe is experiencing one of the hottest summers in recent years. Several countries on the continent have recorded record temperatures.

In the United Kingdom, thousands of people turned to beaches on Sunday for relief from the heat, which could reach 40º this week, a historic record, as the country officially recorded the highest temperature in July 2019. was 38.7 °C. National Weather Service, Met Office.

High temperatures are a challenge for Britons, as few homes in the UK have air conditioning and buildings are built to retain heat.

The Meteorological Department has issued a red alert for tomorrow and Tuesday, advising people not to venture out in the sun between 11 am and 3 pm. Brighton, a seaside resort 76 km from London, was packed over the weekend with temperatures still in the mid-30s.

In the past two weeks, in particular, thermometers have reached 40 degrees in countries such as France, Spain and Italy. In Seville, southern Spain, must be registered up to 45ºC.

Prolonged heat waves and droughts are emerging as a weather phenomenon – compounded by global warming – that will affect large parts of Europe in the Northern Hemisphere summer.

Spain and Portugal experience the driest conditions in a millennium; Italy’s longest river, the Po, is at its lowest level in 70 years, while parts of the Rhine River, Western Europe’s most important waterway, have not seen such low levels in more than 15 years.

Crops are drying up and power plants are shutting down, threatening an already inflation-stricken sector and could lead to further rise in food and energy prices.