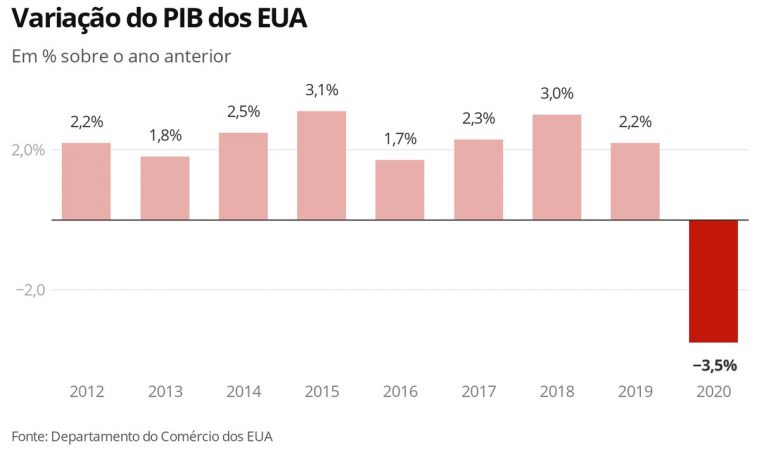 According to data released on Thursday (28) by the official statistics office (BEA) of the US Department of Commerce, the US economy has decreased by 3.5% over the previous year.

The International Monetary Fund (IMF) forecast a 4.3% decline in US GDP in 2020.

They were partially offset by increases in federal government spending and fixed residential investment.

According to the BEA, the decline in consumer spending has come mainly from services, particularly food and housing, health and recreation services. The decline in exports, on the other hand, was registered in both services (emphasis on travel) and goods (especially non-automotive capital goods).

In the fourth quarter, there was a 4% growth year-over-year, compared to the previous three months, when the North American economy recorded a record high of 33.4%.

The USA uses a methodology used by most countries for disclosure of quarterly GDP. In Brazil, for example, IBGE reports quarterly growth in relation to the immediately preceding quarter and the same period in the previous year. The annual rate, on the other hand, means that the percentage of growth or decrease was maintained for the entire year if the GDP varied.