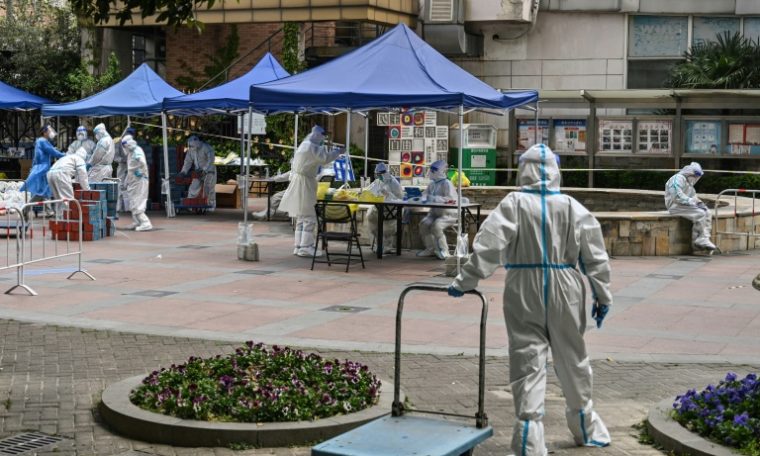 The United States government has ordered all non-essential staff at its consulate in Shanghai to leave the Chinese city, amid severe confinement by authorities due to the COVID-19 outbreak with thousands of cases per day.

The State Department ordered employees and their families to leave “due to the impact of the current COVID-19 outbreak and restrictions related to the People’s Republic of China response,” an embassy spokesperson said in a statement.

US diplomacy also expressed “concern for the safety and well-being of American citizens to government officials of the People’s Republic of China”, the text said.

Despite the precautions, the virus has spread through the country since March, with more than 100,000 cases in Shanghai alone, resulting in confinement to the city of 25 million residents.

China faces the most severe restrictions since the virus emerged in Wuhan in late 2019, growing anger from metropolis residents over food shortages, and an inflexible policy of isolating people who test positive in quarantine centres.

The megacity recorded more than 23,000 new infections on Tuesday.

Most residents live in strict confinement, but those in areas with a low incidence of the virus were allowed to leave their homes, which was celebrated on social media.

The US embassy last week said it would allow its non-essential staff to leave the city because of the outbreak and warned its citizens in China about “arbitrary” anti-Covid measures implemented in the country.

The spokesman said the State Department now assures that the “best thing” for employees and their families is to reduce numbers and reduce operations as we deal with changing circumstances.

China has rejected US criticism of the captivity in Shanghai. Beijing diplomacy spokesman Zhao Lijian on Saturday opposed what he called “baseless allegations” and said China’s policy was “scientific and effective”.

Authorities have made available thousands of new beds in about 100 temporary hospitals as part of a policy to isolate anyone who tests positive for Covid, symptomatic or asymptomatic.

Shanghai residents began to express outrage at the restrictions. Many have complained on social media about food shortages and the inflexibility of a policy that led to a health care professional thrashing a dog whose owner tested positive.

Despite the criticism, officials defended the “Covid zero” strategy and Shanghai’s health secretary, Wu Qianyu, said on Sunday that the measures would not be eased.

The main home delivery platform has announced that they intend to recruit thousands of workers to increase food stocks and reinforce supplies of basic products.

+ New Montana: the third generation of Chevrolet pickups will arrive in 2023
+ Omicron: Unexpected signs of infection in children worried medical teams
+ Mercadão de SP Vendors threaten to blow fruit to customers
+ Video: Mother attacked on social media for wearing tight clothes to take son to school
+ Horoscope: See today’s forecast for your zodiac sign
+ What is known about fluorone?
+ Lemon squeeze trick created a craze on social media
+ ‘Ichthyosaur-monster’ discovered in Colombia
+ One twin became a vegetarian, the other ate meat. check result
+ See which were the most stolen cars in SP in 2021
+ Campaign identifies giant squid responsible for shipwreck in 2011
+ US agency warns: never wash raw chicken meat