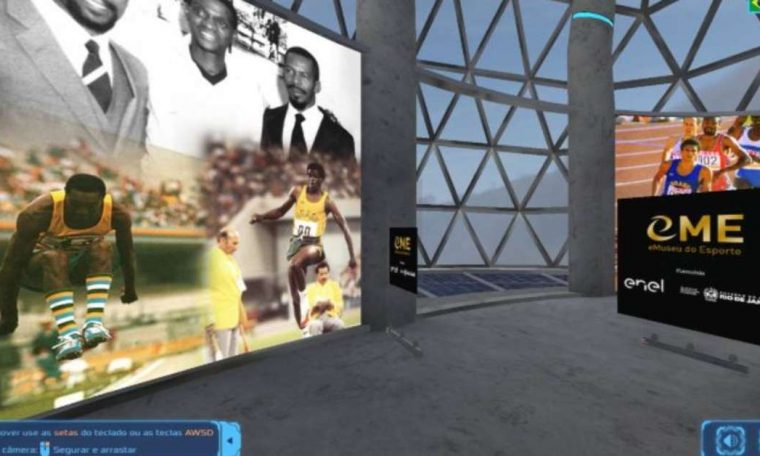 Hebert Conceicao’s thrilling gold in boxing, Isaacius Queiroz in canoeing, Raisa Leal’s silver in skateboarding, Myra Aguiar’s bronze in judo and all other medals won by Brazilians at the Tokyo Olympics, apart from those still on the chest of Paralympic athletes In the country, the theme of 3D exhibitions will be Virtual Museum of Sports In October.

Created in 2020, the eMuseum project increased the number of 3D galleries and exhibitions this year. virtual gallery of Brazilian Athletics Confederation (CBAT) joined CBB, CBTM, CBCA, COB, CPB, Military Sport, among others, and will portray the stories behind Brazilians’ medals at the Olympics and Paralympics in Tokyo in October. The exhibitions are immersive and the technology used allows the visitor to be free to navigate wherever he pleases.

“All 21 medalists will narrate behind the scenes, the emotions, the difficulties of training in the pandemic. We will show the medals in 3D and let the flame burn”, he explains state Researcher Bianca Gama Pea with Professor Lamartine da Costa, creator of eMuseu. The project is collaborative, has more than ten permanent galleries in addition to exhibitions, and was created with the aim of spreading sport as an agent of potential and change and social inclusion.

Earlier this month, the platform inaugurated what it considers to be one of its main initiatives. in partnership with the United Nations and Pierre de Coubertin Brazilian Committee (CBPC.)), the Olympic Reflection and Human Dignity exhibition was launched, which uses the Olympic Games to address social, humanitarian and sporting themes based on four themes: freedom of expression, intersexuality, refugee athletes and the values ​​of sport.

“We were able to bring in historians, institutions and professionals from around the world who represent these topics. And in the virtual, it’s very easy to take this discussion to more places,” says Bianca. “Sports imitating life, as well as social crises, resonate in the Olympic environment, in athletes and their surroundings. From this view, we can reflect on how much sport demands values ​​that guide, Socially desirable conduct, so to speak”, says Nelson Todd, Curator of the Exhibition and Professor at PUC in Rio Grande do Sul.

More than 20 topics have been explored by experts from nine countries through photos, audio and video in this virtual multimedia exhibition. Ricardo Brando, postgraduate coordinator in exercise and sport science at the State University of Rio de Janeiro (UERJ), discusses freedom of expression in a time of authoritarianism.

“Governments have an obligation to protect the right to freedom of expression, which includes the right to seek, receive and disseminate all forms of information, regardless of borders. These values ​​are even greater in a world stricken by the worst health crisis more importance than the growing wave of authoritarianism and denial experienced in history and in many countries around the world”, explain the researchers, who explain the need to make punishment more flexible for athletes who manifest themselves at the Olympic Games. warns about.

The International Olympic Committee (IOC) ruled that protests during the Tokyo Olympic Awards would be vetoed, but partially relaxed Rule 50 of the Olympic Charter by allowing demonstrations at press conferences and competitions.

American Raven Saunders, a woman, black and gay, was one of the protesters in Tokyo. As he stepped onto the podium to receive the silver medal in shot put, he raised his arms and crossed his fist over his head in an “X” in support of the downtrodden who struggled with discrimination inside and outside the sport. Took. The gesture was analyzed by the international body commanding the United States Olympic and Paralympic Committee, but the IOC decided to suspend the investigation.

“The challenge before the IOC and the adherents of Olympism, a principle based on human dignity, is to create the greatest possible coexistence between the organizational principles of the Olympic Charter and the values ​​that have supported it throughout the existence of the IOC”, analyzes Brando. .

Professor and researcher in the fields of sociology, anthropology, sport and gender studies at the Federal University of So Carlos (UFSCAR), Wagner de Camargo reflects on intersexuality in sport. Tokyo-2020 went down in history as the first Olympics in which trans athletes participated, such as New Zealand weightlifter Laurel Hubbard, and Canadian women’s soccer team player Quinn, who finished Brazil in the quarter-finals and in Japan. Won silver. athlete to win an Olympic medal.

On the other hand, South African sprinter Castor Semenya, a two-time Olympic champion in the 800 meters, was influenced by regulations on differences in sexual development after World Athletics, the governing body of athletics around the world, recommended women with high levels of testosterone. is required. Take medication to lower the level of this hormone. Semenya competes in women’s competitions, but for World Athletic, women with masculine characteristics, like those in South Africa, have an “unfair advantage” over their opponents. She did not move to Tokyo.

Teacher explains, “Modern Olympic history has not bothered to problematize gender issues in institutional sporting venues. The equality of possibility of the male and female categories has hidden the body’s control of who can compete and who cannot. is”, the teacher explains. “Sports entities have not given up their biceps control over athletes’ bodies.”

The idea of ​​eMuseum is to register and disseminate the importance of sport through inspiring stories, inclusive education, economic growth, innovation and infrastructure, responsible consumption and production, and means of partnership and implementation. United Nations with the objectives of sustainable development.

The Forum for the Conservation of the National Sports Heritage is collaborative and was created last year, conceived by Professors Lamartine DaCosta and Bianca Gama with the support of UERJ, which created a technical framework for social enterprises and social cooperatives to house the project. Incubator was offered.

At first, the museum would physical, in the velodrome of the Barra Olympic Park, but the directors changed their mind by choosing to “invest in innovation” and went to the United States and European countries to learn about the concept of Olympic museums. Develop a collaborative platform, “so that there is a voice in all modalities”.

Bianca explains that there are plans to build a physical headquarters for the museum, but, for now, the focus is on finalizing the project of traveling trucks that will take technical exhibitions to the cities of Rio de Janeiro.

“I believe that the museum has to reach the people. This is our concept. We changed our approach because we wanted to make the population aware that we are no longer a museum. We are a museum which is a part of all Brazilian initiatives. brings together sporting institutions”, he insisted on Bianca

The football also has space on the stage, which paid tribute to Pele’s 80th birthday and 70th birthday in Maracana, the largest ever reach of the e-museum. And there is also a deal with Chapecoense, Coritiba, Grêmio, Fortaleza and Vasco, clubs that will gain prominence on the stage. “We have expanded the range and we want to show that the museum belongs to all, to all and to all”, said the researcher.

In the coming months, to create an alternative for those who have difficulty navigating through 3D galleries and exhibitions, the e-museum will implement guided tours with “interaction avatars”. “We lived in the past with drowning experiences and we realized that some people are afraid of difficulties, especially the elderly”, he explains.

According to Bianca, the premise of the e-museum is to “transcend sports character”, focusing on “the pillars of education, culture, social support and tourism”. Access and sustainability are also in the plans for the Virtual Museum of Sport, with audio-narrated booklets for the visually impaired and teaching on the use of recycled materials to develop balls, rackets and other items.