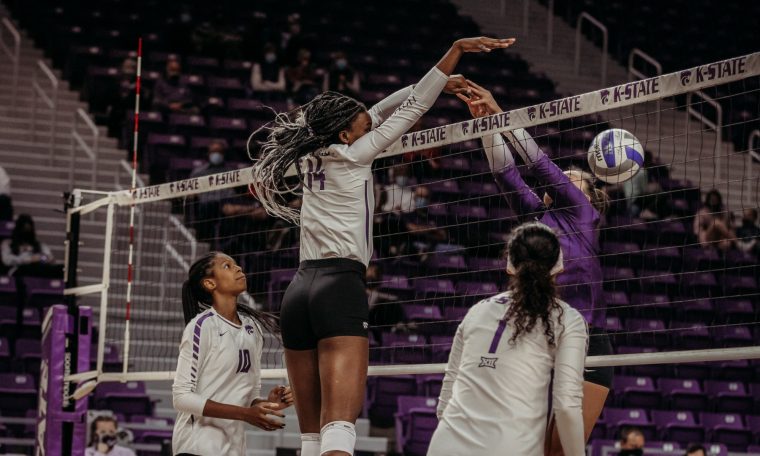 The Wildcats recorded a season-high hitting percentage of .367 percent against Horned Frogs, who were playing their first game in just one month, on Friday night, recording 40 kills on 90 attempts and just seven errors.

“I thought it was a very impressive performance for us tonight,” head coach Susie Fritz said in a K-State Athletics press statement. “Just being able to hit close to .400 feels like a really good team. And thanks to TCU, they are facing some significant challenges in which they have not played for a month. We feel like we’re in late-season form, so I was very happy with tonight’s match. “

The freshman in Friday’s match shone for K-State. After some disappointing performances in the doubleheader with the Texas Tech last week, outfielder Alia Otter Carter made a strong comeback, leading the team to 14 kills and a record of three blocks.

Middle blocker Cady Fernhawls also had a career night, seven carnage and no mistakes in 10 attempts for a career-high .700 hit percentage.

K-State got off to a fast and fair start in the first set, hitting 11 in the first frame and making four errors, leading TCU to a 25-16 victory over the Wildcats 8-2. Over. Out of those 11 kills, Carter recorded four in that first set. Abigail Archibong and Holly Bonde of Redshot Sophomore also added for four blocks in the opening set.

‘It only gives us extra fuel’: K-State is not backing down despite predicting end of Big 12

Archibong led the team in the block overnight, recording a total of six.

Matches for K-State are getting better throughout the match, starting the second set with a 20-9 lead, and ending it at just two errors at the end of 173 with a set of 25-26 for a .395 stake percentage. Delivering two wins. Carter led the set with six murders and no mistakes.

Making their best save until the last minute, the Wildcats started their final set with 11-2 runs and finished with a 12-kill for one error for a .440 hit percentage and a 25-15 set with three wins to beat Horned Frogs. Done.

“We were able to overcome some of the barriers in our lineup and played a little bit tonight but there was no break in the chain,” Fritz said. “For me, these were significant positives. And coming out and being able to hit .367 and catch your opponent under .100 – it’s a great break, it’s a good night for us. “

K-State closed the doubleheader against TCU at 6:30 pm in the Wildcats Home Final at the Bramlage Coliseum. That match can be watched live on Big 12 Now, on ESPN +, with live audio on KMAN Radio.