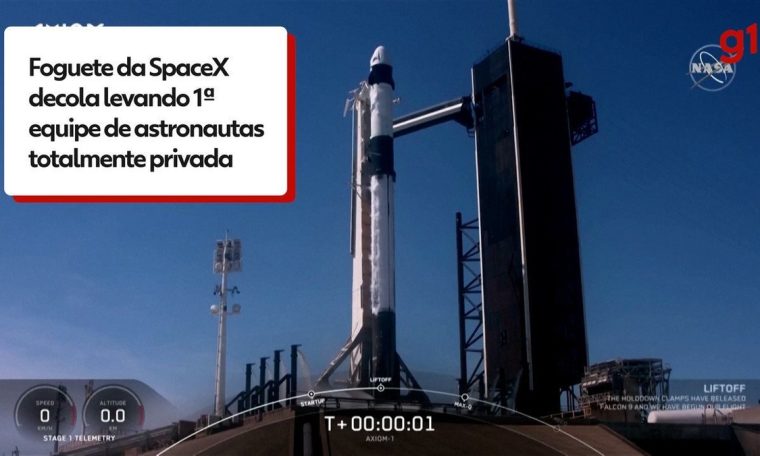 The International Space Station (ISS) should receive four new crew members this Friday (8). The passengers are members of the first completely private mission sent to a space laboratory.

Private astronauts took off from a base in Cape Canaveral, Florida at around 12:10 p.m. They are expected to join the rest of the International Space Station approximately two hours after launch.

This event is a new step towards the privatization of the so-called low orbit – an area where the satellites and the ISS themselves are located.

The mission will last 10 days, and in 8 days the crew will reach the ISS. will ride on, Designated X-1, the mission is organized by the company Axiom Space, which contracted the flight. SpaceXfrom billionaire Elon Musk,

The event, broadcast on the official channel of Musk’s space company, had more than 130,000 viewers. There are three businessmen on the rocket who have each paid tens of millions of dollars and a former astronaut who has been on the ISS. Here are the X-1 passengers:

According to Axiom Space boss Michael Suffredini, “they will do important research“. The crew will conduct 25 scientific experiments in collaboration with research centers on Earth, some of them on stem cells or heart health.

In a press conference before the mission, the commander says that the purpose of the “visit” to the space laboratory has scientific relevance.

“We are not space tourists,” López-Alegria said at a news conference. “It’s not a holiday.”

On the other hand, Axiom Space also has commercial interests. According to the company, this will be the first of several trips to the ISS for study – the company plans to build a private space station.

Axiom Space has entered into an agreement to carry out four missions with SpaceX, NASA, which charges a fee for a stay on the ISS, has already approved the start of the company’s second mission, X-2.

Axiom Space has hired SpaceX to take its personal astronauts to the ISS – Photo: Disclosure

“Private astronauts plan research with real impact”, said ISS Director Robin Gates in an interview with D. The crew will also take the opportunity to bring NASA experiments back to Earth, which she says will be very useful because the air lab is overcrowded.

The move towards low-orbit privatization is encouraged by NASA, which no longer wants to manage the operation of a station, but rather hires the services of private structures, to focus on distant exploration. .

Russia also sent newcomers to the ISS in 2021: a film crew for a film shootexcept A Japanese billionaire and his assistant,

SpaceX: 10 points about the company and its controversial founder Elon Musk

With information from the AFP agency.