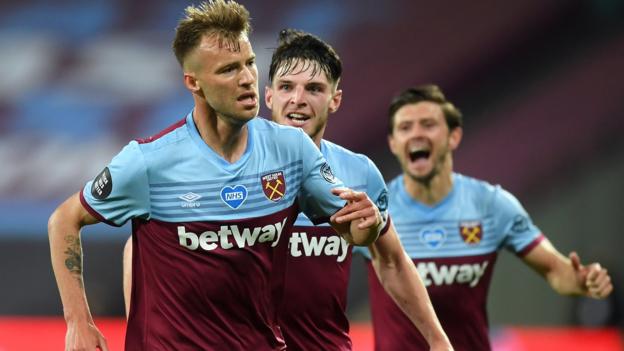 In a topsy-turvy game, which saw West Ham infuriated when Tomas Soucek’s first-half goal was ruled out by VAR, substitute Yarmolenko made the decisive contribution when the finished off a superb counter attack with a classic left-foot finish.

It looked like both sides would have to settle for a point but that late twist not only provides a huge morale lift to David Moyes’ side, putting them three points clear of the relegation places, but also completed a good 24 hours for Manchester United in the race for Champions League places after their win at Brighton and third-placed Leicester City’s loss at Everton.

Moyes was angry when Soucek saw a first-half goal ruled out because Michail Antonio was adjudged to be offside and in Chelsea keeper Kepa Arrizabalaga’s line of vision.

Chelsea then took the lead through Willian’s penalty but battling West Ham levelled through Soucek’s header right on the stroke of half-time.

Man-of-the-match Antonio bundled West Ham in front six minutes after the interval but this eventful affair looked to be heading for a draw when Willian’s superb free-kick with 18 minutes left drew Chelsea level.

And yet, with injury-time looming, West Ham broke and the tireless Antonio set up Yarmolenko for a crisp finish that gave Moyes’ men what could be a priceless three points.

West Ham manager Moyes needed a big performance to turn around their fortunes in an increasingly fraught battle to avoid the drop.

And when he was needed, Antonio stepped up with a performance of determination and quality as he led from the front to see off the challenge of Chelsea as they chase a place in the top four.

Antonio was a potent mix of skill and power, a central figure as he was controversially adjudged to be in Kepa’s eyeline when West Ham’s first goal was disallowed, then scoring their equaliser before leading the counter that led to Yarmolenko’s winner.

See also  Coronavirus: 'Refunds unlikely' if travellers have to self-isolate

West Ham needed a reaction after losing at home to Wolves and away to Spurs since the Premier League kicked into action again – and there will be no better tonic for Moyes and his players than a win over their arch-rivals from west London.

With a visit to Newcastle United and a home game against Burnley on the horizon, with both teams in form, it was vital West Ham gained full reward and Antonio was the driving force behind this vital victory.

It is hard to escape the sense that Kepa still faces a fight to secure his future at Stamford Bridge after an uncertain season that even saw the £71m signing dropped for Willy Caballero shortly before the season went into hiatus.

And he did nothing to dispel doubts here. When Chelsea came under pressure in the first half, he failed to command his area and they were fortunate to see Soucek’s goal chalked off by VAR before the Czech rose to head West Ham in front from another corner.

He still has much to prove and Chelsea boss Frank Lampard will expect better as he tries to cement a season of improvement with a place in the top four and another season in the Champions League.

This was a real disappointment for Chelsea, especially as the force appeared to be with them after William’s second goal and they looked the most likely winners.

But they were caught out by a lightning break that ended in Yarmolenko’s goal and the chance to close even further on fading Leicester City and maintain the gap between themselves and in-form Manchester United was lost.

‘Everything was going against us’ – what they said

On VAR decision: “At that moment I thought everything was going against us. The first goal is vital and when you lose it you think here we go again but great credit to the players, they kept at it and I thought we got the reward. The equaliser was deserved.”

On the winning goal: “We had to counter because they had pinned us right back. We were always waiting for a moment or a chance. We hoped luck would change for us, we felt it had not been with us in some games, we worked harder and deserved that luck.

“We need him (Antonio) so much. He led the line really well. You have to win a game people have not been expecting. I think it was a shock after we saw the performance of Chelsea at Manchester City. Chelsea played a lot of good football. We’ve done well but our football has to get better.”

“We dominated the game in terms of possession, but make mistakes and teams will hurt you. I’m not happy with any of the goals. You don’t get given victories for scoring two goals, you have to be better than that.

“There were moments they counter-attacked, which we knew they would. There were details in the game which we knew but we lost because we didn’t get them right. Against West Ham you have to make recovery runs. That is the bit we got wrong.

“It is why we are fighting for top four not one or two, because we don’t get things right as much as the big boys do. I am not happy but at the same time we are two points ahead of Manchester United, who have been going great for some time.

“If you don’t get details right in big games, you’re going to drop points. At times we have played really well this season. As a group we need to find more consistency.”

Willian in the goals all year round – the stats

See also  UFLA by Lavras - Gerais. Identified variants of COVID-19 from Manaus and the United Kingdom

Chelsea host Watford in the Premier League on Saturday, 4 July (20:00 BST), while West Ham travel to Newcastle the following afternoon (14:15).