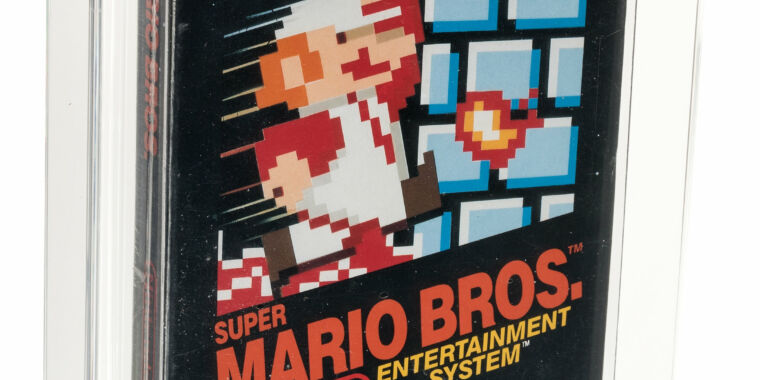 A sealed, early copy of Super Mario Bros. for the NES sold for $114,000 Friday at specialist house Heritage Auctions, setting a new record for the sale price of an individual video game.

The online auction surpassed the old record set by a $100,000 sale of a “sticker-sealed” Super Mario Bros. early last year. At the time, the seller behind that $100,000 edition told Ars that it was “probably the wrong move, long-term, to sell.”

For context, the Guinness World Records certified the world’s largest video game collection sold at auction for $750,000 in 2014. That collection contained over 11,000 games, including over 8,300 in their original box.

Why’s it so valuable?

Heritage Auctions video game specialist and consignment director Valarie McLeckie, who helped shepherd this record sale, tells Ars that this “3-code variant” of Super Mario Bros. dates back to mid-1987. That makes it “slightly more attainable to find” than the very earliest test-market editions of the game, from late 1985 and early 1986, which were only sealed with a small circular Nintendo sticker (the earlier $100,000 sale came from that earliest batch). That also means it’s not among the very first shrink-wrapped copies of the game, which date back to mid-1986.

Still, the fact that this copy of the game features a cardboard hangtab inside that shrink-wrap, “speaks to a level of vintage” that puts it in a rarefied class. “I would suspect sealed cardboard hangtab copies [still available today] number in the single digits,” McLeckie said.

Remaining copies that are in good enough condition to earn a Wata Games certified rating of 9.4 out of 10, as this one was, are even rarer. “In this grade especially, it’s quite an impressive piece,” McLeckie said.

“Considering this game was printed from late ‘85 until the early ‘90s, the number of [mid-‘80s] cardboard hangtab copies to those later ‘90s copies are very few and far between,” McLeckie told Ars. “Most of those earlier copies were purchased and opened, because they were closer to the time of the game’s release.”

While Heritage is protecting the anonymity of the seller at their request, McLeckie said this ultra-valuable copy of the game “came from outside the collecting hobby,” which she described as “very curious… an attic find scenario.” McLeckie said she suspects it was simply “purchased [in 1987] and put somewhere and forgotten about. Whoever had it was lucky enough to keep it in a safe space.”

“When I told [the seller] what they actually had, I wanted to be conservative when I gave the estimate, to not give false hope,” McLeckie continued. But then another sealed hangtab copy of Super Mario Bros. sold for $40,200 despite a Wata rating of just 8.0. “So… I was like, ‘Well, if an 8.0 sold for that, I wouldn’t be too surprised if this one sold for six figures.’ But I was trying not to actively anticipate it.”

Are we in a classic-game pricing bubble?

Friday’s record sale is the continuation of a trend that has seen some sharp, quick inflation in sale prices for certain sealed games in recent months. NES games in particular have seen their sale prices shoot up of late; a sealed copy of Mike Tyson’s Punch-Out! recently sold for over $50,000, for instance. Games for later systems have been bid up heavily as well; an early sealed copy of God of War for the PS2 sold for $2,640.

That represents a shift from earlier days in-game collecting, when ultra-rare game variants like Nintendo World Championships and Stadium Events tended to command the highest prices. Now, instead, “from what we’ve seen, [collectors] tend to gravitate most towards what they loved most as children,” McLeckie said. And that means sealed copies of well-known (and often heavily produced) games in hard-to-find, top-quality condition.

“There’s a shift to what people are looking to add to their collections these days,” McLeckie continued. In the earlier days of game collecting, when graded condition was not as much of a focus, “it was easier for people to find what resonated with them as kids. Then they moved on to the next thing; people wanted to complete system sets. From that perspective, people are going to look for some games rather than others. The rarity factor played a much bigger role than it has been recently. I wouldn’t be surprised if [rarity] comes back around in importance the future.”

With sealed game prices shooting up so quickly, some collectors and observers see the beginnings of a bubble developing in the market, and expect prices will come back down to more reasonable levels eventually. But McLeckie disagrees.

“I fully believe that this is just as respectable a form of collectible as comics,” she said. “We’ve just now started to dip a toe into formalizing this market. By and large, people are just starting to tune into the fact that there is a rarity-based system involved.”

“Things will change over time,” she continued. “Where we’ll see fluctuation, only time will tell. [But] I fully believe in the strength of this market. Video games have been solidified as an important piece of popular culture, and we all like to celebrate the beginnings of our favorite pastimes. I have no doubt that people will continue to do that.”