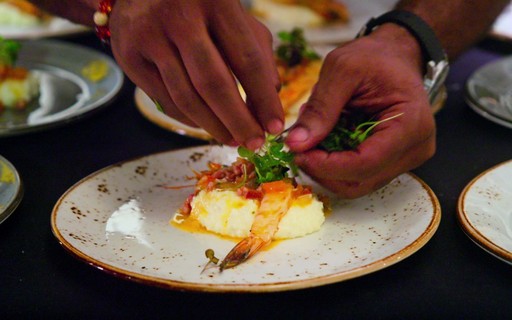 Series launched in May 2021 From Africa to the USA: A Gastronomic Journey It has been very successful in depicting the African influences present in the cuisine of certain regions of the United States. Based on a book by New York food writer and researcher Jessica B. Harris, the production shows that American food is based on ingredients and recipes that were introduced by enslaved Africans. Presenter, chef and author Stephen Satterfield, reveals recipes and ingredients that show how the African continent influenced the creation of America and what is known today as American cuisine.

There are 4 episodes full of history, food and lots of emotion. In high on the hog (original name of the series) For example, it is possible to find that some ingredients that are fundamental in American cuisine, whether in the Americas or in Brazil, such as okra and yams, were brought by enslaved Africans and “okra soup”. ” (USA) and “karuru” (Brazil) became immortal in recipes.

A food that carries with it history, culture and lineage.

African culinary culture is not so prevalent in our daily lives, but it is rooted in our daily lives, whether through the use of ingredients such as palm oil, okra, yam, spices such as cumin, coriander, and even in kitchen utensils. I through. The pestle, for example, the wooden spoon, is similar to that used in other countries where African populations were obtained that were enslaved by Europeans.

To talk about colonial food is not to hate the influence of colonists. It is possible to create a reality where cultures communicate with each other and together we will create a more human world, where respect comes first.

To free the palate from colonization is to welcome ingredients from Africa and America, to value aphrodisiac food and its contribution to building our culinary culture. It is only a small part of all this that will portray him, and it changes our perspective on this continent called Africa that the world has despised for centuries!

I invite you to watch the series, learn more about the flavors of the diaspora and get a feel for how amazing the food is.

Let yourself indulge in new blends of flavors and taste experiences, I am sure you will love it! you come with me?

Gumbo. Learn the ancient recipe for

In a large saucepan, heat half the butter and fry the chicken. Add Cajun seasoning and cook, stirring, until chicken is lightly browned. Take out and keep aside. In the same pan, heat the remaining butter and saute the chilies, celery, onion, garlic and bay leaves. Add chorizo ​​and mix. Add the wheat flour little by little, stirring until well incorporated. Let it cook for about five minutes or until it loosens from the bottom of the pan.

Add peeled tomatoes and chicken stock. Mix and boil. Add reserved chicken, and season with salt and pepper. Cover and cook for about 30 minutes. Add bhindi and cook for five more minutes. Remove from heat and finish with thyme and chopped chives. Serve with white rice.