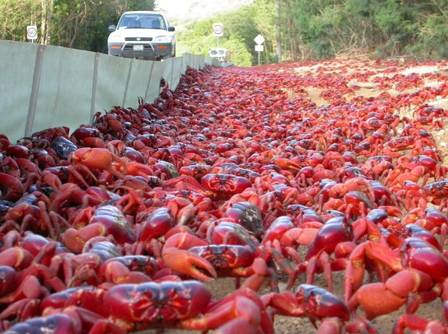 Images refer to several a “Bible Plague”, but it’s really about Sea migration of about 50 million crabs for mating period, A “swarm” of scarlet creatures blocked roads from the woods to the coast of Christmas Island, near Western Australia.

Incredible images show organisms descending in large groups that are believed to be One of the largest animal migrations on the planet, Every year, about 50 million crabs leave the forest after the October or November rains and go to sea to mate.

Crabs usually eat leaves, fruits, flowers and seeds, but they have a “dark” side that prompts them to eat the puppies, The cannibalistic side of crabs appears when the young are used by adults as part of their diet, returning from their first migration at sea.

The inhabitants of the Drumsite settlement in the north-east of the country were imprisoned in their homes Because of the large number of crabs on the roads on Sunday (11/14).